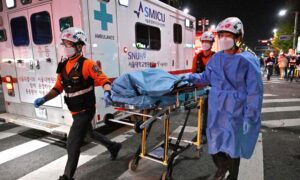 An Australian has died in a stampede in the South Korean capital that has left more than 150 people dead after a crowd became unruly.

The Department of Foreign Affairs and Trade confirmed it had been notified of the Australian’s death in Seoul on Saturday night, local time.

A spokesman said consular officials were providing assistance to the deceased’s family.

They are also working to help other Australians present at the event.

“The Australian government sends its condolences to the family and others affected by this tragic incident,” the spokesman said.

The disaster happened as a huge crowd celebrating Halloween on Saturday night surged into an alley in a nightclub area, which is popular among young people, expatriates and travellers, in Seoul.

“Our sincere condolences for all affected by this terrible tragedy,” Prime Minister Anthony Albanese tweeted on Sunday before news broke of the Australian’s death.

Also earlier on Sunday, Ambassador to the Republic of Korea Catherine Raper joined Mr Albanese in conveying Australia’s condolences to the South Korean government, describing the incident as “tragic”.

“We ask all Australians in Seoul to check in with friends and family to let them know your whereabouts,” Ms Raper tweeted.

More than 80 people were injured, many seriously, in the melee around 10.30pm in Seoul’s Itaewon district.

Choi Sung-beom, head of the Yongsan Fire Station, said many of the victims were women in their twenties, according to Reuters.

Up to 19 foreigners were among the dead, including citizens of China, Iran, Uzbekistan and Norway.

It was the first Halloween event in Seoul in three years after the country lifted COVID-19 restrictions and social distancing.

Many of the partygoers were wearing masks and Halloween costumes. Some witnesses said the crowd had become increasingly unruly as the night wore on.

The disaster is among the country’s deadliest since a 2014 ferry sinking that killed 304 people, mainly high school students.

Australians concerned about the welfare of loved ones in Seoul can call the Department of Foreign Affairs and the Trade Consular Emergency Centre on 1300 555 135. Those outside Australia can call +61 2 6261 3305.

By Finbar O’Mallon in Canberra

105 Containers That Fell Off Cargo Ship Believed to Have Sunk: Coast Guard