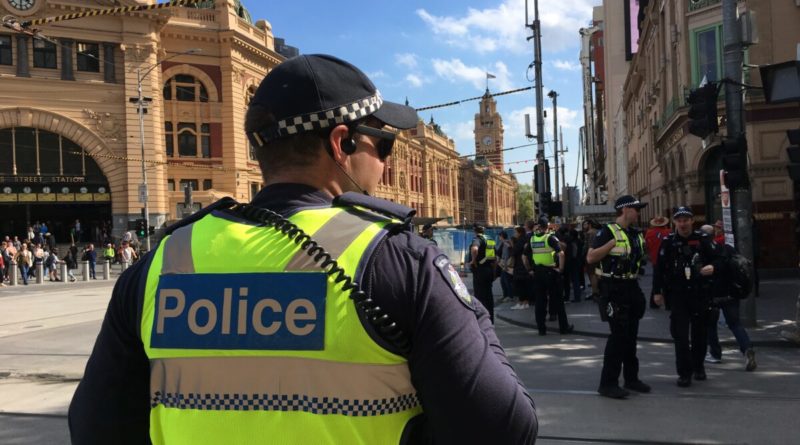 In September 2021, footage emerged on social media showing Peterson-English speaking to three uniformed police officers at Flinders Street Station before a fourth police officer, Barrett, can be seen walking up behind him, grabbing him around the upper torso, and then throwing him (in a “sling tackle”) to the ground face-first.

An audible sound could be heard as the man’s head hits the floor. The man was motionless afterwards, and Barrett was suspended.

The incident occurred at the height of anti-lockdown protests in the city, which saw tens of thousands take to the streets and police deploy heavy measures to control rallygoers.

Melbourne, at the time, was one of the world’s longest-locked-down cities. The protests around the Shrine of Remembrance were part of an ongoing series of rallies, which started after demonstrations broke out in response to the shutdown of building sites—affecting the construction industry.

However, several incidents of violence erupted from both sides, with a select few protestors causing damage to the office of the Construction, Forestry, Maritime, Mining, and Energy Union.

While in some incidents, police used pepper spray and projectiles to disperse protest groups.

The Magistrates Court has heard evidence around the incident and police operational procedures.

Jacob Wright, a Victoria Police protective services officer, told the court Peterson-English had been acting erratically and “swearing and rambling” while filming officers.

Other witnesses described his behaviour as “barking” like a dog, “laughing like the joker,” and making “exorcist-type” noises, according to AAP.

He allegedly entered the station around 1.15 p.m. after separating from the main body of protestors marching towards the Shrine of Remembrance.

Acting Inspector Matthew Hargreaves, from the Centre of Operational Safety, said officers were authorised to carry out “takedowns” or sling tackles, noting however that police should avoid letting the head of the detainee hit the ground.

“We consider it to be dangerous, a process that should be avoided,” he added. “The technique doesn’t demonstrate due care to minimise risk of injury.”

Hargreaves noted that it was up to the discretion of the officer how much force they used—considering the physical attributes of the individual.

“Not everybody is a six-foot-two footy player from Echuca,” he said.

Hargreaves conceded that if a detainee wore multiple layers of clothing, it could exaggerate their size, leading police to possibly overestimate the amount of force needed.

But he also said police should resort to non-lethal options and get individuals to comply voluntarily.

“Anyone that had the cornucopia of info would be justified with viewing the complainant with concern,” they said.

“With the protest outside … the manpower diverted to deal with the complainant could have put other members at risk.”

Magistrate Rob Starry deferred his final decision and adjourned the matter to February 2023. He requested the prosecution and defence provide more written submissions.

‘Someone Is Lying’ in War Veteran Roberts-Smith Case