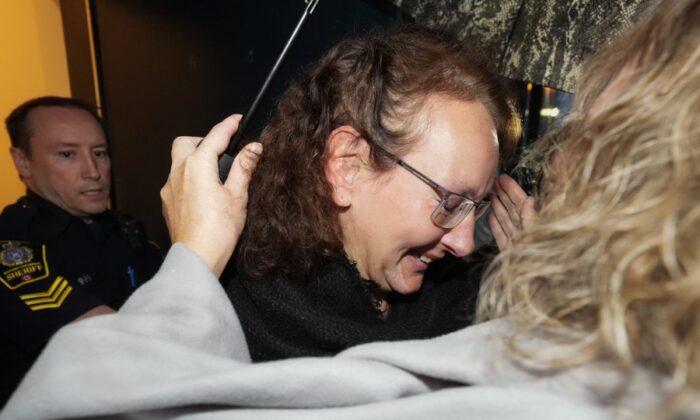 Kimberly Polman smiles as she’s greeted by family members after being released from custody at provincial court, in Chilliwack, B.C., on Oct. 27, 2022. (The Canadian Press/Darryl Dyck)

A British Columbia woman who was repatriated to Canada from a detention camp in Syria this week after marrying an ISIS fighter has been granted bail pending a peace bond hearing.

Kimberly Polman will be released on recognizance and will be living in Chilliwack, 100 kilometres east of Vancouver, where she appeared in provincial court.

Under the bail conditions, Polman is prohibited from possessing a cellphone or any other device capable of connecting to the internet, and from driving any motorized vehicle.

She cannot possess any documents related to a terrorist group or leave B.C. without the consent of her bail supervisor, and she must be electronically monitored and abide by a 9 p.m. curfew.

Evidence and arguments presented at the bail hearing are subject to a publication ban.

Polman’s next court appearance was set for Dec. 2.

She is one of two women who returned to Canada from a detention camp in Syria on Wednesday.

Oumaima Chouay, a Quebec woman who was repatriated alongside Polman, was arrested and faces four counts, including leaving Canada to participate in the activity of a terrorist group.