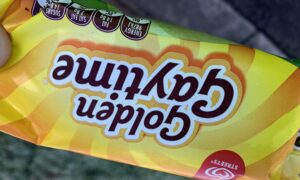 Streets ice cream is being pressured to rename its iconic “Golden Gaytime” brand after a member of the LGBTQIA+ community deemed the biscuit and ice-cream treat to be “offensive” and “outdated.”

But pushback against the move is gaining support by those who say it is simply ‘cancel culture’  “gone way too far,” according to a survey of 45,000 people by news.com.au which showed 98 percent of Australians surveyed believed the name was “harmless.”

The Australian man, known only as Brian Mc, launched the petition earlier this month. It has since been signed by 1, 250 people.

Speaking to Sky News host Paul Murray, Mc said the term “gay” used on the ice-cream was “offensive” and not fitting in today’s climate.

“I just feel at this day and age that ‘gay’ is a sexual orientation, and its double meaning of being joyous or happy is an outdated meaning,” Mc said. “Red skins and a few other examples have updated their names. I just feel that it’s time for Golden Gaytime to follow.”

He called on Streets to change the name to “joyous” or “happy” and added that the term gay was no longer used in its original sense.

“As a part of the LGBTQIA+ community, I believe my sexual identity is owned by me, not a brand and that the outdated meaning no longer applies,” he wrote on his online petition.

However, members of the LGBTQIA+ community have also condemned Mc’s petition and one man has created an alternate petition to counter the name change. Approximately 1, 200 people have signed this petition.

Cameron Reeley, who also identifies as homosexual, told 3AW’s Tom Elliott that while he’s never seen the name as derogatory, it’s “mental gymnastics” to call it so.

“‘Gay’ is not a slur. The notion that ‘gay’ should not be on a packet is one I would expect to hear come from a homophobe, not a gay Australian!” Reeley wrote on his petition.

A Streets spokesperson told NCA NewsWire that the Golden Gaytime was released in Australia during 1959 when the word “gay” had not yet been applied to gender preference.

“The origin of the ‘Gaytime’ name was and remains related to having a joyous or happy time and is meant to capture the pleasure that comes with enjoying an ice cream.

“The ‘Gaytime’ name is not and never has intended to cause offence, and this petition is the first that we have been made aware of.
“As a Unilever brand, Streets has a deep and longstanding commitment to help build a more diverse, equitable and inclusive society for all.”

In the past year, other brands have changed their names to remove offensive and racist connotations. These include Redskins to Red Ripper, Chicos to Cheekies, and Coon Cheese to Cheer Cheese.