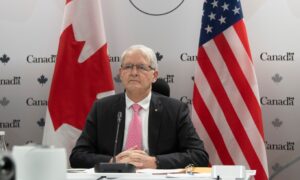 The new sanctions announced Wednesday follow similar measures taken by the United States and European Union three weeks ago in response to Navalny’s treatment and concerns about Russia’s human-rights situation.

That includes the detentions of thousands of protesters over the past two months, many of whom had taken to the streets in support of Navalny.

“The Russian government has repeatedly shown its unwillingness to respect the basic rights of its own people and address concerns raised on multiple occasions by the international community,” Garneau said in a statement.

“Alongside our partners, Canada will continue to increase pressure on the Russian government to unconditionally release Mr. Navalny and his supporters who have been unlawfully detained. Russia’s gross human-rights violations will not go unanswered.”

Russia has previously promised to retaliate against the American and European sanctions.

Those targeted by Canada on Wednesday include two officials in Russian President Vladimir Putin’s office as well as the head of the country’s security service, its prosecutor general and the director of Russia’s penitentiary system.

The list also includes two top figures in the Russian defence department and the head of the country’s national guard.

Navalny has emerged as the main political challenger to Putin, who has led Russia for most of the past 20 years. Navalny has repeatedly spoken out against corruption at the top of the Russian government, charges Putin has denied.

Navalny was hospitalized in Germany last fall after what has been described as an attempted assassination attempt. Germany subsequently accused Russia of having poisoned him with a nerve agent during a visit to Siberia in August.

The Kremlin’s denials of any involvement were met with skepticism at the time from Canada and its allies.

Navalny eventually recovered and returned to Russia in January, where he was immediately arrested, on what critics have described as politically motivated charges, and sentenced in February to more than two years in a penal colony.

Thousands of pro-Navalny protesters were arrested while he was being tried, with some figures putting the number as high as 10,000, part of what human-rights groups have described as the continuing deterioration of human rights in Russia.