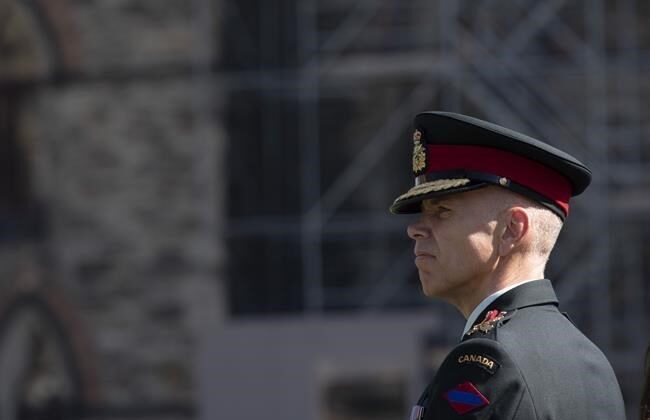 Lieutenant-General Wayne Eyre listens to speakers during a change of command parade for the Canadian Army on Parliament Hill on August 20, 2019 in Ottawa. Acting chief of the defence staff Lt.-Gen. Eyre says he has asked for military officials to develop a “play book” for handling future misconduct allegations against senior officers. (Adrian Wyld / The Canadian Press)

OTTAWA, Kan.—The acting chief of the defence staff says he has asked military officials to develop a “playbook” for handling future misconduct allegations against senior officers.

That is one of several new initiatives that Lt.-Gen. Wayne Eyre told a parliamentary committee today are underway to address sexual misconduct in the ranks.

The Canadian Armed Forces will also update the existing code of conduct to more clearly define actions that are unacceptable and violate the military’s values.

Eyre also suggested to the House of Commons committee on the status of women that the military is looking at wrapping up Operation Honour, the all-out effort to eliminate sexual misconduct that launched in 2015, and shifting to a new approach.

Eyre repeatedly linked the problem of inappropriate sexual behaviour to “power dynamics,” and says that is one of the areas that the military needs to better understand.

Eyre appeared at the committee after Defence Minister Harjit Sajjan, who continued to defend his handling of allegations against former defence chief Gen. Jonathan Vance.

Death Toll From Brazil Floods at Least 91, With Dozens Lost