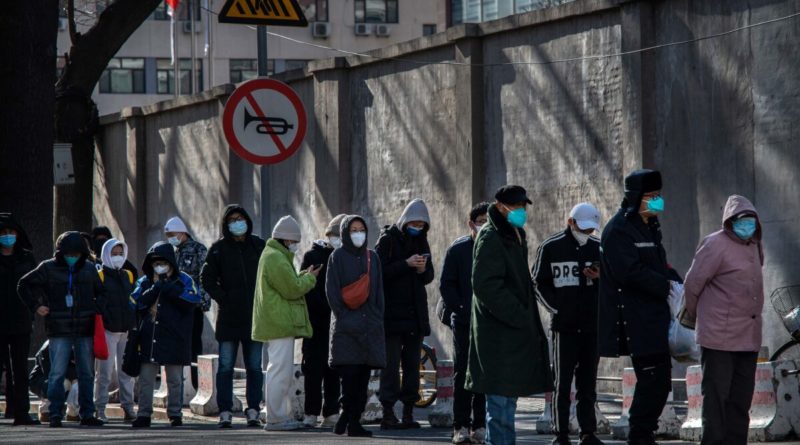 
COVID-19 cases have been increasing in China, including since the ruling communist regime eased its “zero-COVID” restrictions on Dec. 7. Netizens have been reporting that hospitals and mortuaries are being overwhelmed by demand, particularly in nine provinces where the relatively new Omicron subvariants BQ.1 and BQ.1.1 have been reported to be spreading quickly.

On Dec. 14, China’s Center for Disease Control and Prevention announced for the first time that 49 cases of BQ.1 had been found in nine Chinese provinces, as well as cases of BQ.1.1. However, the authorities didn’t identify which provinces were the ones affected.

BQ.1 and BQ.1.1 are descendants of the Omicron variant BA.5, which was first detected by scientists in South Africa in April. They started taking over BA.5 as the dominant COVID-19 strains in the United States in October.

Just days earlier on Dec. 12, the Chinese Communist Party’s (CCP’s) official media “People’s Daily” reported, citing Chinese experts, that the strains spreading in China were still Omicron BA.5.2 and BF.7. According to the report, most cases in Guangzhou were BA.5.2, with a high proportion of asymptomatic patients due to milder clinical condition than BF.7, which was said to be the cause of most of the infections in Beijing, which has been experiencing more severe cases.

But the Dec. 14 announcement has stirred distrust and fear in Beijing, made worse by the many claims on social media of residents experiencing allegedly more severe symptoms unlike the typical cold-like symptoms associated with previous Omicron variants.

Many had already suspected that a new variant was spreading in the city.

They had dubbed the virus “Hellhound,” a name they found fitting for the dire situation, following a sharp increase in cases and worsening symptoms including high fevers and lung infections. “Hellhound” was first used in Europe by locals fearing a faster spreading variant, in reference to the pet of Hades, the Greek God who guards the gates of the underworld.

Many Beijing residents posted on social media that people have now been infected by the “Hellhound” variant, describing more severe symptoms and numerous deaths, which many suspect is BQ.1.1, perhaps in relation to the government’s announcement.

There have yet to be any reports to confirm which variant is actually related to the reports of worsening symptoms.

Authorities had earlier dropped their mandatory mass testing program, and the country’s National Health Commission stated on Dec. 14 that it would no longer be reporting asymptomatic cases.

Sean Lin, a U.S. virologist and former director of the Department of Virology at the U.S. Army Research Institute, told The Epoch Times on Dec. 14 that “many people in mainland China have symptoms such as fever and cough but in addition to the mutated Omicron virus, there may be other factors such as influenza.”

“How many people are now suffering severe respiratory symptoms, and what is the number of hospitalizations, critical patients, and deaths? The authorities need to be transparent and publicize the numbers. But like in the past three years, official data have been opaque,” he said.

Doctors in Beijing have posted videos on social media calling on patients with mild symptoms not to visit the emergency room. This is not only to avoid infecting the medical staff there, but also to avoid the spread of the flu, they said, which can aggravate COVID-19 symptoms.

Many patients in critical condition are described as having symptoms in the lower respiratory tract, which resembles the symptoms during the outbreak in 2020 rather than the typically mild cold-like symptoms of other Omicron strains.

A Beijing netizen posted that they know more than a dozen colleagues in a company in Chaoyang District who have been infected with “Hellhound,” and all of them are seriously ill. A 27-year-old colleague ran a high fever of 40 degrees C (104 degrees F) for five consecutive days, which left two of his organs inflamed and him vomiting blood. He is currently on a ventilator.

This netizen also said that several patients in the ward “have infections affecting the lungs, and some are suffering COVID + hyperemia.”

Current affairs commentator Li Muyang said on his NTDTV talk show on Dec. 13, “Judging from the information provided in these posts on social media, Hellhound is terrifying, with a high infection rate, severe symptom rate, and high death rate,” he said of the netizenry’s description of the situation in the Chinese capital lacking information from official channels.

“If this is the virus that is spreading in Beijing, it’s not hard to understand the situation in the hospitals and mortuaries,” he said of other chaos reported in the city.

The wave of likely COVID-19 infections has hit services in large cities hard, especially in Beijing and Guangzhou.

Patients have been reportedly flooding fever clinics and paralyzing local hospitals, with a large number of doctors and nurses also falling ill. Those showing moderate symptoms have been asked by the authorities to keep working.

Dr. Li from Beijing Chaoyang Hospital told The Epoch Times on Dec. 9 that the ballooning number of COVID-19 infections has also led to a severe shortage of manpower among medical staff.

“We are seriously understaffed now. Many doctors and nurses are infected, and they cannot go to work. The same is true in other hospitals. There are many infections and a shortage of manpower. Several departments in our hospital have closed [because of it],” Li said.

The head nurse named Wan Ling (pseudonym) from a top-tier hospital in Beijing told state media that, “At present, the symptoms of the infected colleagues in the hospital are relatively serious. Almost all of them have a high fever of 39 degrees and are sore all over their bodies. None of them are asymptomatic.”

Ms. Zhang, a Beijing resident, told The Epoch Times on Dec. 14 that residents know it is now very difficult to expect ambulance responses to calls for help.

According to a Beijing 120 emergency call dispatcher, the emergency system is collapsing. People who called at 7 a.m. for an ambulance didn’t see it arrive until 1 pm, according to an incident reported by Radio Free Asia.

Ms. Zhang said that delivery services have also been paralyzed in Beijing with many couriers infected, “(The goods) are piled up like mountains.”

Many mortuary staff in Beijing have also reported infections.

According to screenshots from netizen “Dolphin Peipei” on Chinese social media platform Weibo, medical workers at the Oriental Hospital of Beijing University of Traditional Chinese Medicine recently said, “Because the funeral home employees have tested positive one after another in the past two days, there is a serious shortage of staff. Due to the recent increase in the death rate in Beijing, the scheduled cremation time is at least 5 to 7 days, and the accumulation of remains is serious …”

Mr. Lin, a staff member of Beijing Babaoshan funeral home told The Epoch Times on Dec. 14 that the number of people who died in recent days was particularly high. “Every day is very busy now. I have never been so busy. I can’t answer the appointment calls, and many people are waiting in line.”

Mr. Liu, a staff member of Tongzhou Funeral Home in Beijing, said: “The farewell ceremony is all cancelled now. The whole of Beijing is like this, it’s a city-wide regulation. The cremation appointment has been scheduled until the Dec. 22.” As for the reasons for the backlog, he just said, “It is related to the COVID epidemic. But I don’t know whether the deaths are directly caused by the underlying diseases or COVID.”