A razor-thin election victory in Nigeria’s Plateau State has prompted observers to question whether ethnic-cleansing raids by terrorists seek to tilt next year’s presidential elections.

More than a decade of seemingly endless attacks on Nigeria’s rural populations has seen radical insurgents capturing large territories across the country’s north. The displacements and demographic distortions across hundreds of communities have raised fears of political takeover by radicalized Muslims, according to lawmakers who spoke to The Epoch Times.

“What I see this trying to do is to foist a foreign government on communities,” Simon Mwadkwon, a member of the Nigerian House of Representatives, told The Epoch Times.

More than 2.7 million people—chiefly northern Nigerian minorities—have fled their homes in recent years due to armed attacks linked to terrorists from the Fulani tribe, according to Stefanos foundation. Terrorists who identify as Fulani—a large ethnic group in West Africa with more than 20 million members in Nigeria—have been blamed for the murder of tens of thousands of Nigerians since 2001.

The attacks often precede mass village takeovers in the region, according to the International Committee on Nigeria, raising fears of a gradual Islamization of vast regions.

A special congressional election held on 26 Feb in a hard-hit corner of Plateau State was seen by some as a bellwether of demographic changes brought about by the bloody massacres of sleeping villagers by bands of men in the middle of the night. The election choices in Bassa fell along sectarian lines, with Christians and Muslims backing candidates of their respective faiths. In the months leading up to the special election, Christian tribal leaders in Bassa county had reported that voters in more than 16 devastated towns could not return to their registration precincts to vote, yet election officials refused to allow them to vote from neighboring districts, or to vote absentee. “The few [villagers] that have attempted returning have still faced attacks,” Robert Ashi, the leader of a local Christian development association, told The Epoch Times.

The election was organized to replace a deceased congressman representing Bassa and Jos North counties which had been wracked by violent attacks in recent months.

Turnout was low. Out of more than 600,000 registered voters in the area, only 74,572 cast their ballots, according to officials. That gave an edge to the Fulani, Mark Lipdo, the Program Coordinator of Stefanos foundation wrote to The Epoch Times.

“A lot of people, especially Christians, did not vote,” Lipdo wrote in a text message, “People are worried about safety.”

The declared results showed the candidate of the local Christian tribe, Musa Agah, only managed to pull 40,343 votes, narrowly beating his Muslim challenger by a meager 2,586.

“We fought doggedly and will fight another day insha Allah [God willing],” wrote Sheikh Seikh, a leader of the Muslim candidate’s campaign team, on Facebook. “2023 will come like a blink of an eye. Never admit a failure until your last attempt, and never admit your last attempt until your success,” he wrote, referring to the country’s next general elections in 2023.

Attacks by Fulani militants have seized more than 100 towns in Plateau, according to Emancipation Center for Crisis Victims in Nigeria (ECCVN). The attacks still threaten hundreds of surrounding towns, according to Rep. Mwadkwon, who represents the State’s Riyom County. Mwadkwon says the attacks are aimed at a “total change of demographics” for ethnic and political domination.

“We have said it several times. That is land-grabbing and if you grab land, you want to occupy the political space; you get the power and now dictate what you want,” said Mwadkwon to The Epoch Times.

In the south of Kaduna State, which neighbors Plateau State, the Fulani currently decide the votes of 108 communities seized through armed invasions, said Jonathan Asake, the Chairman of the Southern Kaduna Peoples Union (SOKAPU).

“What is happening in Plateau, Kaduna, Benue, Nasarawa, Taraba, and other States of the Middle Belt, is a grand agenda of displacing people from their ancestral lands and taking over those lands for interests that have economic, political, and cultural dimensions,” Asake told The Epoch Times in a phone call.

As many as a quarter of Nigeria’s 200 million population could be disenfranchised during the country’s 2023 elections if the displacements persist, said Solomon Maren, the representative of the Bokkos County of Plateau State at the Nigerian House of Representatives.

“The level of disenfranchisement in the coming elections will be one of the worst in the history of Nigeria, because so many displacements took place after the 2019 elections,” Maren told The Epoch Times in a phone call.

“Quite a number of villages have been taken over, and the original occupants of those places cannot have access to vote in those areas,” said Maren.

“It, therefore, means there is no way for them to participate [in elections], and if they cannot participate because they cannot access those polling units, it means they have been disenfranchised. And these communities we are talking about is not one, two, three or four communities. [There are] several of them,” he said, accusing President Muhammadu Buhari’s administration of complicity.

“The APC [All Peoples Congress] government is benefitting from all of the crises, and that is why they are not doing anything to curtail it,” said Maren. Backing this claim, Asake told The Epoch Times the government is leveraging insecurity to rig elections and remain in power.

“Election results were manufactured in the northeast,” he said, referring to the country’s last general elections that brought President Muhammadu Buhari to power for a second term in 2019.

There are always concerns over any election being conducted in Nigeria, wrote Kyle Abs, the Executive Director of International Committee on Nigeria (ICON) to The Epoch Times.

“Not only is there a threat of corruption and meddling, but there is a complete lack of trust and transparency,” Abs wrote in a text message to The Epoch Times.

“Yet, when insecurity threatens the ability of concerned voters’ desire to express their right to vote, they are met with apathy and indifference. Instead of making accommodations and provisions to aid voters who have been displaced, they simply ignore their plight,” Abs added.

The population displacements and annexations by radical insurgents across Nigeria’s north calls for global action, wrote religious-freedom advocate Andrew Boyd to The Epoch Times in a text message.

“This is no longer Nigeria’s issue, or even simply Africa’s problem,” wrote Boyd, who currently serves as a spokesman for Release International London. “It is a global crisis that requires a global solution.” 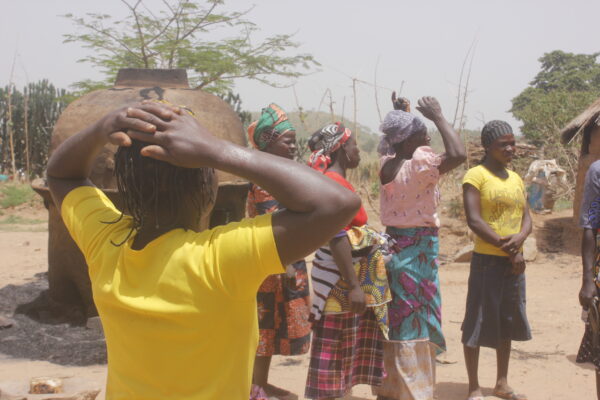 Helpless women stand inside the premises of their burnt house after an attack in Maiyanga village near Jos on 14 April 2020, photo by Masara Kim.“If you lift your eyes to the north and look at the Sahel region stretching right across Africa, you see a range of Islamist groups, including Boko Haram and ISIS, who seem to be bent on radicalizing the region. This same phenomenon of Islamist extremism and expansion is emerging—especially in the north—fueled by weapons from conflicts in Libya and Syria. And, although these antagonists differ in flavor, they are essentially of the same substance,”  Boyd added. 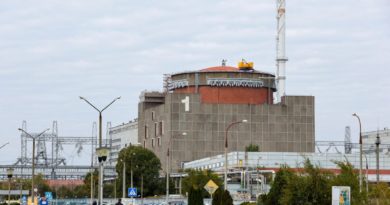