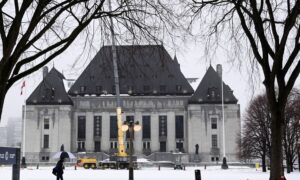 I have problems with the foundational assumptions for the recent ruling on the Greenhouse Gas Pollution Pricing Act from the Supreme Court of Canada. Chief Justice Richard Wagner said this in his decision:

“There is also a broad consensus among expert international bodies that carbon pricing is a critical measure for the reduction of GHG emissions. This matter is critical to our response to an existential threat to human life in Canada and around the world. As a result, it passes the threshold test and warrants consideration as a possible matter of national concern.”

It’s simply not true that climate change poses an existential threat to life in Canada. It’s more likely that warming would improve our living conditions overall. That’s not to say that other parts of the world are not at risk from rising temperatures, certainly from rising sea levels, and warmer temperatures could also impact ecosystems. However, hobbling Canada’s economy will not be useful in helping to save the world.

The court ignored the fact that climate has always changed. The 2007 Intergovernmental Panel on Climate Change report acknowledged that solar activity explained over 50 percent of the temperature increase prior to 1950. Other causes include variations in the earth’s orbit around the sun, the earth’s wobble, and changes in its tilt. Those long-term cyclical forces explain the coming and going of ice ages. So how much impact from carbon dioxide remains once we factor in these forces? As Bob Essenhigh at the Ohio State University told me, we may still be coming out of the last ice age.

I’m with Danish scientist Bjorn Lomborg in believing that the thrust of policy needs to be mitigation of the effects of climate change and rising sea levels. Lomborg says the world is wasting trillions of dollars on trying to stop the unstoppable. Consider, for example, the Dutch template. Much of Holland lies below sea level thanks to the barriers they built and the machinery employed, when necessary, for dewatering.

It’s unrebuttable that a warming surge began to end that last ice age about 20,000 years ago. It started when ice over what is now Edmonton was a mile high, and sea levels were about 300 feet lower than today. Then there was a pause in warming of several thousand years. Next, a surge in warming occurred between approximately 12,800 and 11,500 years ago. In Greenland, the temperature rose by some 7 degrees Celsius within a decade. This warming spurred humans’ shift toward farming and urbanization.

For the historical perspective, there exist numerous credible authorities. I’ve been reading an article by Anuradha K. Herath in the Dec. 20, 2010, edition of Astrobiology Magazine titled “How Earth´s Orbital Shift Shaped the Sahara.” The Sahara was fertile grassland during the Holocene Optimum warm period about 7,000 years ago. It was much like Canada’s Prairies today, and populated by humans.

We know that centuries of cooling followed before the Roman Warm Period from about 250 BC to 400 AD. Then there was another cooling until the Medieval Warm Period, between about 950 and 1250. That’s when the ancestors of today’s Inuit populated our Arctic, probably travelling by boat through ice-free waters. For good reason, the next six centuries were called the Little Ice Age when Vikings, who had been farming successfully in Greenland, gave up. This cold period began to wind down around 1850, well before major industrialization got under way.

The chief justice was right to say that most major institutions endorse the hypothesis that carbon dioxide causes climate change. But if consensus was reliable, orthodoxy would have it that the sun goes around earth. Today, we seldom send dissidents like Galileo to prison. We just deplatform and ostracize them.

In a 6-3 decision, the majority of justices all ignored the substantial cohort of responsible critics of climate change policy. In Canada, they include Ross McKittrick, Ian D. Clark, Lawrence Solomon, Tim Ball, and Patrick Moore (co-founder of Greenpeace). Climate change religiosity has become a bottomless money-bucket for the cause and justification for more intrusive government. Criticism has largely become the preserve of those in retirement or those who are not otherwise subject to financial retribution.

The world has real problems with pollution, but carbon dioxide is not a pollutant. So why, I ask, would the Supreme Court’s judges collude in hobbling the Canadian economy and promoting the one-party state? How could they all be such historic, scientific, and economic illiterates?

Colin Alexander was publisher of the Yellowknife News of the North. His degrees include M.A. from Oxford in Politics, Philosophy and Economics. His current work in progress is a book with the working title Justice on Trial.

Bill of Rights Would Give Free Speech a Legal Trump Card