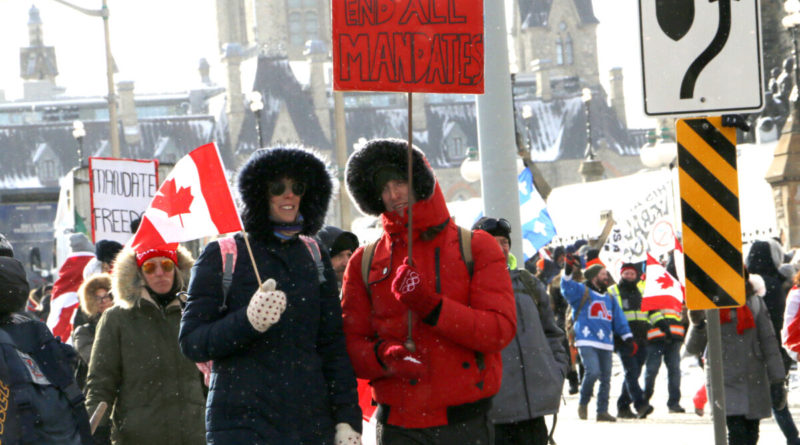 
The cross-country protests and blockades of last winter demanding the lifting of COVID-19 restrictions were not a national security threat, according to RCMP Commissioner Brenda Lucki.

“There was some snippets of information on open source, and that came through intelligence—things that were similar to the storming of the Parliament—but none of it manifested itself, so it wasn’t a national security threat, it was a national event,” Lucki told the Public Order Emergency Commission on Nov. 15.

Lucki was asked about the situation in Ottawa and elsewhere such as Windsor, where protesters blocked the Ambassador Bridge for about a week.

Lucki mentioned she was not assessing the events using section 2 of the Canadian Security Intelligence Service (CSIS) Act, as she said that would be done by “people a lot smarter than myself.”

In February, the Trudeau government declared a public order emergency under the Emergencies Act, which is defined as an “emergency that arises from threats to the security of Canada and that is so serious as to be a national emergency.”

Those threats are defined under section 2 of the CSIS act and include espionage or sabotage, foreign influenced activities, terrorism, and attempts to violently overthrow the government.

CSIS Director David Vigneault is expected to testify at the inquiry in the coming weeks that the protests did not meet the threat definitions, according to his interview summary with the commission presented to a separate witness this week.

In her testimony, Lucki also addressed her input into the Emergencies Act.

Liberal ministers have often said they invoked the act based on the advice of law enforcement.

“It was only after we got advice from law enforcement that we invoked the Emergencies Act,” Prime Minister Justin Trudeau said on April 27.

“We invoked the Emergencies Act on advice from the police,” Public Safety Minister Marco Mendicino said on May 3.

Former deputy minister of Public Safety Rob Stewart had then said in June that ministers were trying to say that police had asked for the tools contained in the Emergencies Act, after Lucki and other police chiefs testified they had never requested or advised invoking the act.

Based on testimony at the commission, it now appears it’s the other way around, with the Liberal government discussing the use of the act first and then asking police what powers could be included.

Lucki told the commission that at no point had she asked for the act but she had been asked what tools could be useful.

Inquiry Commissioner Paul Rouleau verified this information at the end of Lucki’s testimony.

“Did you make any recommendation to IRG [Incident Response Group] or the cabinet on the invocation of the Emergencies Act?” said Rouleau.

“No, we stayed away from that, it was for them to decide if it was necessary, if they had met the threshold. It’s no different than any of the other legislations that we are providing input on,” said Lucki.

Noé Chartier is an Epoch Times reporter based in Montreal.

US Says It Stopped Spying on Allies in 2014: Norway PM