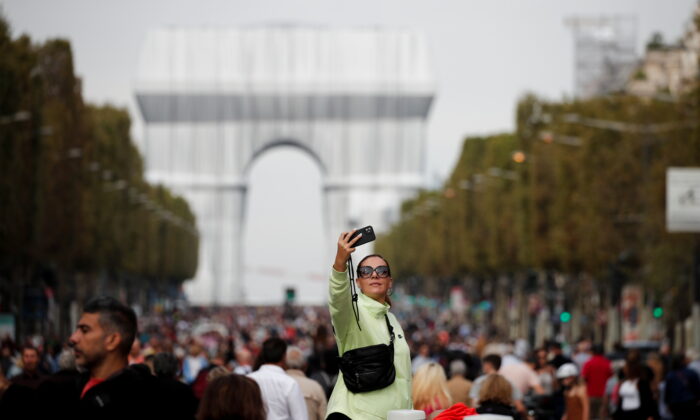 A woman takes a selfie near the Arc de Triomphe monument, fully wrapped as part of an art installation entitled “L’Arc de Triomphe, Wrapped” conceived by the late artists Christo and Jeanne-Claude, on the Champs Elysees avenue during a car-free sunday in Paris, France, on Sept.19, 2021. (Benoit Tessier/Reuters)

PARIS—Crowds of Parisians and tourists strolled along the Champs-Elysees avenue on Sunday as a car-free day removed most of the traffic from the French capital’s usually busy streets.

Pedestrians wandering along the most famous thoroughfare in Paris could view the Arc de Triomphe in its temporary guise as an art installation. The monument has been covered in silvery wrapping, as conceived by the late artist Christo.

“It’s our chance to walk on the ‘Champs’, to look at the Arc de Triomphe face-to-face and not just from the sidewalk,” said Annie Matuszewski, a 68-year-old Parisian.

Paris held its first car-free day in 2015 in a central zone, expanding the initiative in 2017 to other districts within the city limits. Paris Mayor Anne Hidalgo has sought to use the annual event to curb vehicle use and reduce air pollution.

Other thoroughfares in the capital on Sunday were filled with walkers and cyclists, although buses, taxis, and residents using cars for essential journeys could still use some streets.

The Socialist mayor, a candidate in next year’s presidential election, has also reduced the speed limit on most of the city’s streets to 30 kilometres per hour (19 miles per hour) from 50 kph (31 miles per hour) and pedestrianised some busy roads along the river Seine.

But her policies have irritated motorists, particularly some residents of the suburbs who complain they do not have adequate alternative forms of transport.

“Car-free day is great if we integrate the entire Paris region,” said Patrice, a retiree in the suburbs. “Otherwise, it’s almost as if they’re saying people living in Paris are doing fine inside their perimeter, and everything outside is not worth their attention.”