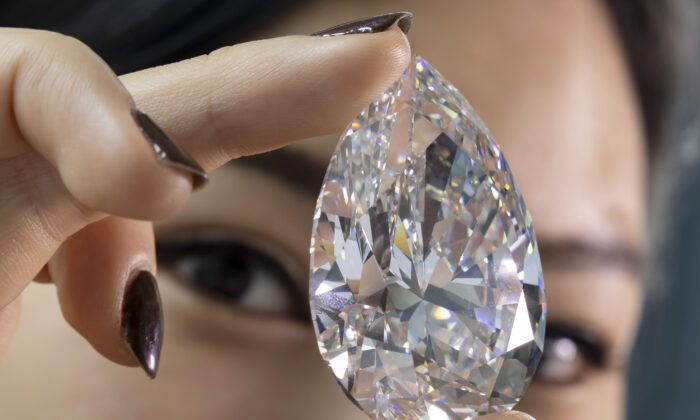 A Christie’s employee holds “The Rock” a white diamond of 228,31 carats which is the largest white diamond ever seen throughout auction market history, during a preview at Christie’s, in Geneva, on May 6, 2022. (Salvatore Di Nolfi/Keystone via AP)

GENEVA—Christie’s says “The Rock,” an egg-sized white diamond billed as the largest of its kind to go up for auction, sold Wednesday for more than 21.6 million Swiss francs ($21.75 million), including fees—though at the low end of the expected range.

The 228-carat pear-shaped G-Color stone, with its platinum pendant mounting, has a gross weight of 61.3 grams (2.2 ounces) and dimensions of 5.4 centimeters by 3.1 centimeters (2.1 inches by 1.2 inches)—making it about the size of a medium hen’s egg.

G-Color is not the highest grade, but fourth on the letter rung below the top-grade D-Color diamonds.

An unspecified private buyer acquired The Rock, for which the pre-auction estimate was between 19 million and 30 million francs.

Max Fawcett, head of jewelry at Christie’s Geneva, hailed a successful sale in “uncharted territory” for a stone of its kind.

Also going under the hammer Wednesday was the “Red Cross” diamond, a 205.1-carat fancy yellow stone, which fetched nearly 14.2 million francs, double the pre-sale estimate. The diamond was cut from a rough stone unearthed from South Africa’s Griqualand mines in the early 20th century, and went up for auction for the first time in 1918.

Fawcett testified to a “huge amount of interest” in the Red Cross diamond, saying that an unspecified “7-figure sum” from the proceeds of the sale to an unspecified private buyer would be donated to the international Red Cross Movement, the Geneva-based humanitarian aid group.

US and European Leaders Warn About China Setting Standards on AI

Hong Kong Seeks Goldmines in the UAE as Over 13,000 Mega-Riches Leaving Hong Kong and China for Singapore