The official witness list for the public inquiry into the federal government’s use of the Emergencies Act has been released by the Public Order Emergency Commission (POEC) and includes the prime minister, key Freedom Convoy organizers, and prominent cabinet members.

The Liberal government invoked the Emergencies Act on Feb. 14 in response to convoy protests, granting police extraordinary powers to clear out protesters from Ottawa’s downtown area and granting banks the power to freeze the accounts of convoy organizers and supporters.

Trudeau announced in April the creation of the POEC to investigate the circumstances leading up to the government’s Emergencies Act invocation and appointed Ontario Appeal Court Justice Paul S. Rouleau as POEC commissioner.

The commission’s public hearings will take place in Ottawa and will begin with six weeks of factual hearings, scheduled to run until Nov. 25, during which time the commission says it intends to call over 50 witnesses.

“This critical phase will shed light on the events that led to the declaration of the public order emergency and fully explore the reasons advanced for the declaration,” said Rouleau in a POEC release on Oct. 11.

Zexi Li, a plaintiff in a lawsuit against convoy organizers, is listed second on the commission’s witness list. The lawsuit also lists “downtown residents, businesses and workers” from Ottawa as plaintiffs, seeking $306 million in damages.

In addition to Freeland and Lametti, other prominent Liberal cabinet ministers are also expected to testify before the commission including Marco Mendicino, Omar Alghabra, Anita Anand, Bill Blair, and Dominic LeBlanc.

Jim Willett, mayor of Coutts, Alta., where protesters blockaded a Canada-U.S. border crossing in February in solidarity with the convoy, is listed as an anticipated witness.

Once the factual hearings are completed, the commission will begin its “policy phase” on Nov. 28, during which time it will hold “a series of round-table panel discussions with experts in various fields related to the Commission’s mandate,” with each panel focusing “on a common theme or set of questions” that have been developed in consultation with the Commission’s Research Council.

“I am confident that, with the cooperation of all of the parties, the hearings will provide a fair and thorough process for the presentation of the evidence required for the Commission to be able to give the public the answers to which it is entitled,” said Rouleau in the Oct. 11 statement.

The commission will present its final report, including findings and recommendations, to the House of Commons and Senate by Feb. 20, 2023.

Standing in a Park for Truth 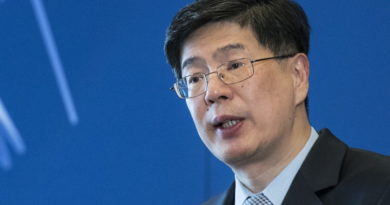