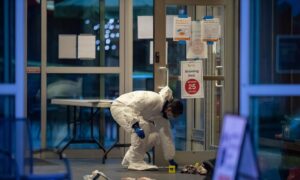 VANCOUVER—Police are working to determine the motive of a series of stabbings that left a woman dead and six others injured inside and around a public library in North Vancouver, B.C., on Saturday.

Sgt. Frank Jang of the Integrated Homicide Investigation Team said a suspect in his 20s was in custody. The man has had interactions with police in the past and has a criminal record, he said.

“Obviously the question is why did this happen, I understand. We believe we know the how, the what, the where and the when. It is our job now to determine why,” he told a news conference near the library. “That is going to be the Number 1 question for us.”

The attack wreaked havoc on a busy shopping area of North Vancouver early Saturday afternoon, where Jang said families had flocked to enjoy the last weekend before the end of spring break.

Steve Mossop and his partner stopped when they saw a woman who was covered in blood while they were driving on Lynn Valley Road next to the library. He said they thought she’d been in a car accident, but she told them she’d just been stabbed by a man.

Mossop said they saw several victims within about 100 metres of each other.

“It seemed like he was just running in a direction, whoever was in his path happened to be victimized,” he said.

B.C. Emergency Health Services said 11 ambulances and two supervising vehicles were sent to the scene after a call was received at about 1:45 p.m.

Jonathan Wilkinson, the MP for North Vancouver and minister of environment and climate change, said he was “shaken” by the attack, and expressed how important the Lynn Valley Public Library is to the community.

“This library has been a secure place for families to gather in the Lynn Valley community for years,” he said in a statement. “Until today, it was unimaginable that such a senseless act of violence could have occurred in the very heart of it.”

On Twitter, Prime Minister Justin Trudeau said: “To everyone affected by this violent incident in Lynn Valley, know that all Canadians are keeping you in our thoughts and wishing a speedy recovery to the injured.”

Jang said every available homicide detective is working on the case as he asked those who may have been in the area on Saturday afternoon to come forward with any information that might help the investigation.

“Everything little thing is important on this one. If you heard anything, if you were here and you saw the man that was taken into custody, if you heard him saying anything or whatever the case may be, we need you to come forward.”

This report by The Canadian Press was first published March 28, 2021.