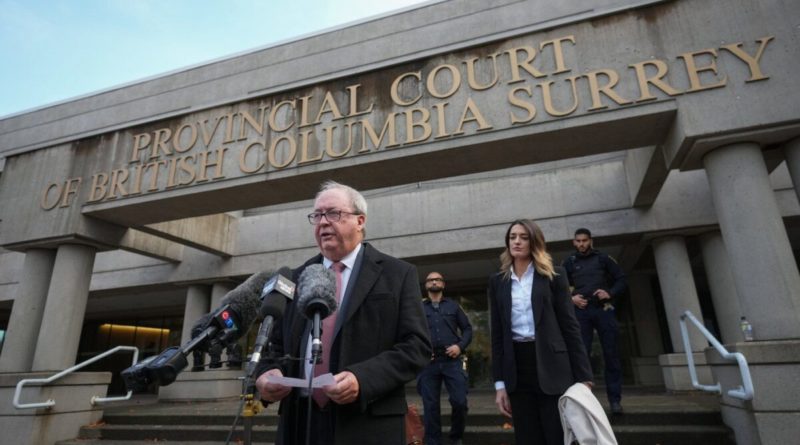 
Former mayor of Surrey, B.C., Doug McCallum has been found not guilty of public mischief by a provincial court judge.

McCallum was charged after telling police that a woman opposed to his plans to replace the Surrey RCMP with a municipal police force used her car to run over his foot in a grocery store parking lot last year.

Police declined to charge Debi Johnstone after the Sept. 4, 2021, confrontation, and instead investigated McCallum for allegedly making a false claim.

But Judge Reginald Harris said he found Johnstone’s testimony unreliable when she said she didn’t run over McCallum’s foot.

McCallum said in brief remarks outside the courthouse Monday that he was “pleased with the decision.”

He thanked his lawyers for “their tremendous efforts,” his family for “understanding and supporting me,” and the media for their “sensitivity” covering the case. “And to the people of Surrey, I love you. I love all of you,” he said.

Harris said his verdict hinged on whether McCallum intentionally misled police and, if so, whether he intended for Johnstone to be suspected of a crime she did not commit.

Harris said although video showed McCallum was not “pinned” by Johnstone’s car, as the former mayor had said, he was satisfied beyond a reasonable doubt that McCallum’s foot had been run over.

“In my view, there’s ample objectively verifiable evidence affirming Mr. McCallum’s assertion regarding his foot. Thus, I conclude his statements on this point are reliable and true.”

McCallum’s lawyers said during the trial that his statements about being “pinned” by Johnstone’s vehicle were “embellishments” due to confusion following a frightening incident.

Harris said McCallum’s pursuit of an investigation of Johnstone had been consistent with what McCallum had experienced.

McCallum appeared to have tears in his eyes after the verdict was announced in court. He smiled and gave a thumbs-up sign.

The trial began two weeks after McCallum’s bid for another term as mayor was ended on Oct. 15 by Brenda Locke, who successfully ran on a promise to reverse the transition to the newly created Surrey Police Service.

In Canada, the maximum punishment for committing the crime of public mischief is five years in jail.