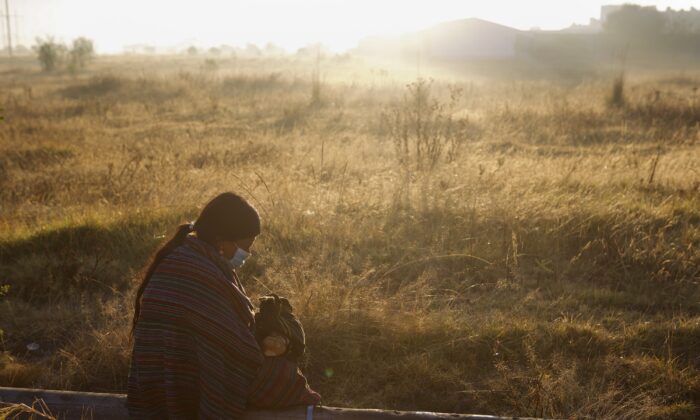 A woman waits for the remains of relatives to take home from the morgue in Quetzaltenango, Guatemala, on Dec. 20, 2021. (Oliver De Ros/AP Photo)

SANTA CATARINA IXTAHUACAN, Guatemala—Hundreds of demonstrators laid coffins on a platform to block a highway in Guatemala Monday to protest the weekend killings of a dozen people.

The protesters placed eight coffins on an improvised wooden platform to demand justice in the case. They carried banners reading, “We have The Right to Live in Peace.”

The killings occured in the village of Chiquix, in western Guatemala near the Mexico border. The hamlet has been involved in a years-long territorial dispute with a nearby town.

The 11 people found shot to death on a road Saturday included men, women and children as young as 5. A local police officer was killed the previous day nearby.

Residents of Chiquix have quarreled over water and land access with inhabitants of the town of Santa Catarina Ixtahuacan. Negotiations between the two sides have so far yielded few results.

Ireland Calls for Justice on 50th Anniversary of ‘Bloody Sunday’