The number of people who entered the UK illegally by crossing the English Channel in small boats this year has reached about 6,000.

On Friday, the Ministry of Defence (MoD) confirmed that six boats carrying 181 people were detected, following the crossing of 562 people in 14 boats on Thursday.

The MoD started publishing daily updates on the numbers of small boat arrivals as the Royal Navy took over “operational command” from the Home Office of handling boats crossing the Channel as part of a shake-up that will see the planned transfer of illegal immigrants to Rwanda.

The Home Office did not reveal the exact number of channel crossings it detected on Wednesday, but Prime Minister Boris Johnson said the number was around 600, which would make it the highest number so far this year. This figure has not yet been confirmed by either the Home Office or the MoD.

According to figures compiled by the PA news agency, around 6,000 illegal immigrants have arrived in the UK in small boats so far this year.

Political commentator Nigel Farage on Friday criticised the Navy’s involvement as a “waste of time and resources,” claiming the vessels used are “too high” to take people on board so their role is limited to towing back empty dinghies.

An MoD spokeswoman said the patrol vessels are being used to bolster the capability in the Channel until “more appropriate” boats are sourced.

In March this year, 3,066 people made the crossing.

Setting out his new plan to tackle illegal immigration on Thursday, Johnson said “seven out of 10” of those arriving in small boats from Europe last year were men under 40 who paid people smugglers to “queue jump and [are] taking up our capacity to help genuine women and child refugees.”

Johnson said he accepts that these people are “in search of a better life, the opportunities that the United Kingdom provides and the hope of a fresh start,” adding, “but it is these hopes—those dreams—that have been exploited” by “vile people smugglers” who are “abusing the vulnerable and turning the Channel into a watery graveyard, with men, women, and children drowning in unseaworthy boats and suffocating in refrigerated lorries.” 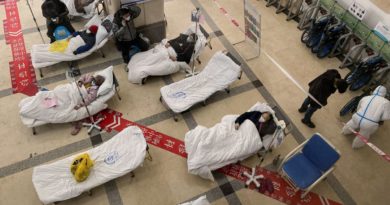