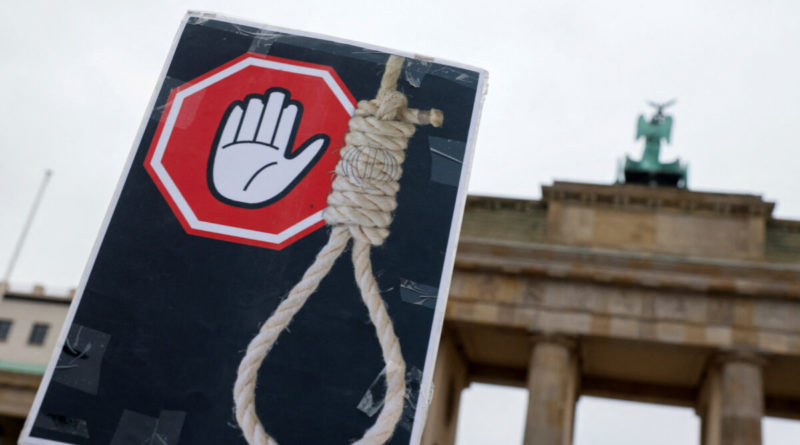 
DUBAI—Iran on Monday hanged a man in public who state media said had been convicted of killing two members of the security forces, the second execution in less than a week of people involved in protests against the regime’s ruling theocracy.

Nationwide unrest erupted three months ago after the death while in detention of 22-year-old Kurdish Iranian woman Mahsa Amini, who was arrested by morality police enforcing the Islamic Republic’s mandatory dress code laws.

The demonstrations have turned into a popular revolt by furious Iranians from all layers of society, posing one of the most significant legitimacy challenges to the Shi’ite clerical elite since the 1979 Islamic Revolution.

Majid Reza Rahnavard was hanged in public in the city of Mashhad Monday morning. “He was sentenced to death for ‘waging war against God’ after stabbing to death two members of the security forces,” the judiciary’s Mizan news agency reported.

Mizan published pictures of the execution at dawn, showing Rahnavard hanging from a construction crane, with his hands and feet bound and his head covered with a black bag.

The semi-official Fars news agency said Rahnavard killed two members of the Basij volunteer force and wounded four others. The Basij force, affiliated with the Revolutionary Guards, has been at the forefront of the state crackdown on protests. The Revolutionary Guards is designated as a terrorist organization by the U.S. government.

Calling for added protests across the country, activists on social media criticized the execution of the 23-year-old Rahnavard as “a criminal act” by the clerical rulers to deter dissent.

“They called Rahnavard’s family at 7 a.m. [local time] and told them to go to the Behesht-e Reza cemetery. ‘We executed your child and buried him,’ they said,” widely followed activist account 1500Tasvir posted on Twitter.

The contents of the post could not be verified by Reuters.

“We denounce this draconian treatment in the strongest terms. These harsh sentences and now the first public execution … are meant to intimidate Iran’s people. They’re meant to suppress dissent,” State Department spokesperson Ned Price told reporters at a briefing.

On Thursday, Iran hanged Mohsen Shekari, who had been convicted of injuring a security guard with a knife and blocking a street in Tehran. It was the first such execution after thousands of arrests over the unrest, drawing a chorus of Western condemnation and sanctions.

State media published a video of a man, who it identified as Rahnavard, stabbing another man who fell against a parked motorcycle, and then stabbing another person immediately afterward before running away.

State television showed a video in which Rahnavard said in the court that he came to hate the Basij forces after seeing them beating and killing protesters in videos posted on social media. Activists said he was forced to confess under torture.

Amnesty International has said Iranian authorities are seeking the death penalty for at least 21 people in what it called “sham trials designed to intimidate those participating in the popular uprising that has rocked Iran”.

The European Union’s foreign policy chief Josep Borrell said on Monday the EU will agree on a “very tough” package of sanctions against Iran to show its support for peaceful protesters.

Blaming the unrest on foreign foes such as the United States and Israel, Iranian Foreign Ministry spokesman Nasser Kanaani on Monday rejected Western criticism of rights abuses during the crackdown as meddling in Iran’s state matters.

Tehran on Monday imposed sanctions on dozens of EU and British officials and entities “over their support and instigation” of the unrest, state television reported.

The unrest has been watched closely by Israel, where a national security official said the executions did not appear to be deterring protesters and could further “box in the regime.”

“Because it can only respond with force, that has reinforced for the public the grievance being protested over,” the Israeli official told Reuters. “There is no returning this genie to the bottle.”

Rights group HRANA said that as of Sunday 488 protesters had been killed, including 68 minors. It said 62 members of the security forces had also been killed. As many as 18,259 protesters are believed to have been arrested, it said.

While the United Nations says the protests have cost more than 300 lives, a top Iranian state security body has said that 200 people, including members of the security forces, have died in the unrest.