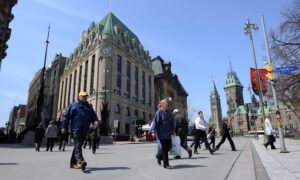 Canada is likely heading into a federal election this fall, but few ridings and few large issues are in contention, leaving election results to depend on many local battles fought on issues that may be more regional.

University of Toronto political science professor Nelson Wiseman told The Epoch Times he expects the Conservatives to attack the Liberals on high spending and scandals while treading carefully on the issue of climate change.

Like other parties, the Conservatives have adopted a price on carbon emissions. Wiseman says although that may please some, “a large part of the Conservative constituency isn’t committed to paying higher prices for fuels. So that makes it tough for them to walk that line.”

Political strategist Jacqueline Biollo said economic growth will be a key issue, “including relaunching local business, and by possibly outlining a plan to reform the fiscal stabilization program and give back to provinces that have contributed more during some of the hardest years.”

Biollo, a principal with Aurora Strategy Group, said in an interview that a winning strategy includes “bold actions to create good new jobs, invest in the middle class and the most vulnerable, and ensure that everyone has a real and fair chance at success.” In addition, get-out-the-vote initiatives for seniors and youth will be vital.

Daniel Bernier of Earnscliffe Strategy Group said big government spending to respond to the pandemic will turn Canadians’ attention toward rebooting the economy and handling the rising cost of living.

“It’s how you balance the economic [interests]—natural resources also being one of the main products, or economic engines, in this country. How do you balance that with the environment, the basic prices? So this in the West, I think, will play hard,” Bernier said in an interview.

Battlegrounds will be in key ridings in Quebec, Ontario, and B.C., according to Wiseman. In the latter provinces, most attention will be on Toronto and Vancouver and their surrounding areas.

“It doesn’t matter what Trudeau does, they’re not going to pick up seats in places like Alberta and Saskatchewan, or in rural Ontario, or rural Manitoba,” he said of the Liberals’ chances in areas with strong Conservative support.

In Quebec, Wiseman thinks the NDP may play spoiler for the Liberals, stealing Liberal votes to give the Bloc seats. “The NDP will have its line: ‘You’ve got to vote for us because we’re the only ones that are really standing for equity and social programs. And even if we can’t win, we can hold the Liberals’ feet to the fire.’”

But a poor NDP showing could give the Liberals a majority.

“The Liberals are going into the election thinking they can get a majority by pulling some more seats in Quebec,” he said.

Bernier has a similar view of the Quebec political landscape. Looking further east, he believes the issue of indigenous rights displacing non-indigenous fishers from their livelihoods in the Maritimes may also displace Liberal MPs from their seats.

“It will be couple of seats down for the Liberals, a couple of gains for the Conservatives, because especially I think that the reconciliation issue in many rural areas, which are more coastal area in Atlantic Canada, has a reaction to it. People feel threatened. Their livelihood that they’ve had for generations—they feel threatened.”

British Columbia “should be interesting,” Bernier says, as the southwest coast and Vancouver Island are up for grabs.

“Trudeau and Horgan are the best buddies. Of course, [Horgan] is just pouring billions of dollars in B.C. with the SkyTrain, with the child-care program,” he said.

He doesn’t expect the Green Party to gain seats in B.C. or elsewhere. “I don’t see anything happening to the Greens this time around. And I don’t think, to be totally blunt, that Annamie Paul is doing any favour to the Greens.”

Wiseman said voters are very familiar with NDP leader Jagmeet Singh and Prime Minister Justin Trudeau, but not Conservative Leader Erin O’Toole. He said increased visibility for O’Toole over the campaign could be important to sway voters who are weaker in their party loyalties or are less familiar with policy issues.

“A large part of the public doesn’t know what he looks like … but when the election campaign is on, he’s going to be on the front section of every newspaper and every broadcast every single day, especially the last 30 days,” Wiseman said.

“There’s more upside for him, I would say, but it depends on how he performs and how he’s perceived and how successful the other parties are and how they paint him.”