The Chair of the Criminal Bar Association has warned a committee of MPs that if the barristers’ strike is not resolved there could be a situation where “you have people on the streets who you would rather not be on the streets.”

Kirsty Brimelow QC, giving evidence to the Justice Select Committee on Tuesday, said a judge in Bristol last week refused to extend the custody time limits for a defendant and released them on bail ahead of their trial.

Brimelow said the judge had said, “the state has had many months to resolve the current dispute” and added, “Today’s predicament arises precisely because of the chronic and predictable consequences long-term underfunding.”

She said: “What we are going to see happening, increasingly, is defendants in custody when their custody time limits are finished they will be let out on bail and there may be situations where you have people on the streets who you would rather not have on the streets, but that is not the responsibility of the criminal bar … it is the government’s responsibility.”

The strike, which is entering its 22nd week, has crippled criminal courts in England and Wales and led to long delays with rape, murder, and many other trials.

Barristers gathered outside courts in London, Birmingham, Bristol, Cardiff, Manchester, and Leeds on Tuesday to protest and a number also assembled outside Parliament as the Commons Justice Committee heard evidence from Brimelow and Alejandra Llorente Tascon, co-chair of the CBA’s young bar sub-committee.

Brimelow was asked by Labour MP Maria Eagle how many times the CBA had asked for a meeting with Raab to solve the dispute.

Eagle asked her whether they had received a letter in reply, telling them to “take a running jump” or had just received “word back” that he did not wish to meet them.

She said they had meetings with junior ministers James Cartlidge—before he resigned on July 7—and Sarah Dines, in the early weeks of the dispute but nothing in the last two months.

The CBA, which says 300 criminal barristers quit the profession last year, began an all-out strike on Monday, in an effort to pressure the government to grant their demands for more money.

Llorente Tascon said there was a legal chambers in London where five out of six junior barristers quit before completing their pupillage and the sixth gave up a few months later.

Asked by the chair of the committee, Bob Neill, about pay, she gave herself as an example.

“In my first year I earned £12,000 and that was before paying for certificates, insurance, and subscriptions. It’s not uncommon for junior barristers to be in the same position as myself,” Llorente Tascon said.

Raab—who was Deputy Prime Minister under Boris Johnson—had promised barristers would receive a 15 percent pay rise for new legally aided work from the end of September but refused to come up with more money for existing cases they are working on.

Eagle asked Brimelow if the dispute might end if the government agreed to extend the 15 percent rise to existing cases.

Brimelow said she would go back to her members if there was a “substantial positive movement” from the government.

Asked by Conservative MP Kieran Mullan how judges had reacted to the strike action, Brimelow said they had been “very supportive.”

“The judiciary see the system, even the crumbling disgrace of the courts that we all work in … and a lot of them used to be barristers so they have seen the system and they are not at all surprised that this is happening,” Brimelow said.

Llorente Tascon gave several examples of how shortages of barristers and judges were affecting the criminal justice system.

“In one serious case, described as the ‘worst of its kind’ in its area, it was listed for trial but adjourned until 2023 for lack of judges. Another case involving rape inside a prison was adjourned due to the lack of a prosecutor,” she said.

Truss has not commented on the barristers’ strike and it is not clear if the new administration will take the same line or will offer more money in an effort to get the criminal justice system back to work.

Among the cases that could be affected is a fitness to plea hearing, which is due to take place on Friday, in the case of Louis de Zoysa, who has been charged with the murder of Sgt. Matt Ratana at a police station in Croydon, south London, in 2020.

De Zoysa, who was severely injured in the incident, remains in hospital and there is a disagreement between the prosecution and defence teams about whether he is fit to face a trial. 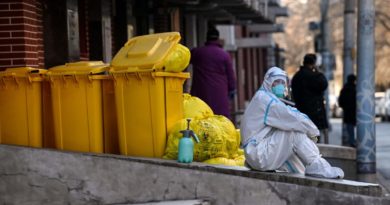