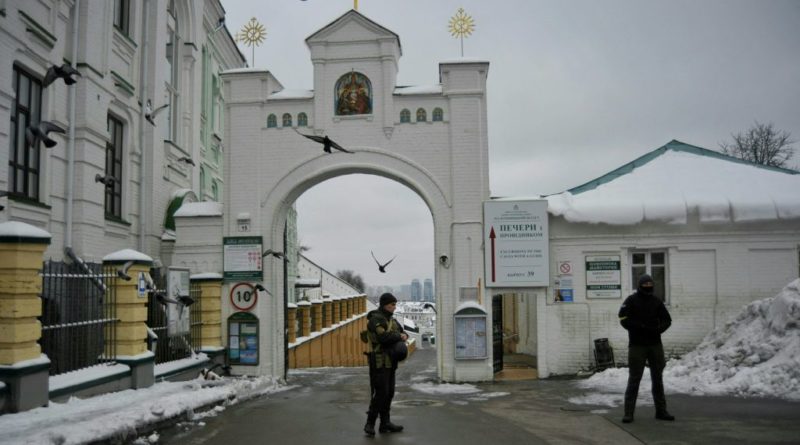 Ukrainian President Volodymyr Zelensky has also unveiled plans to outlaw churches affiliated with Russia—a move he says is necessary to stop Moscow from “weakening Ukraine from within.”

According to political analyst Stanislav Pritchin, Kyiv seeks to establish an Orthodox Church in Ukraine “that is totally independent of the Moscow Patriarchate.”

“The problem for Kyiv is that the UOC is intimately linked to the Russian Orthodox Church—historically, religiously, and ideologically,” Pritchin told The Epoch Times.

On Nov. 22, the SBU raided several church properties, including Kyiv’s iconic Pechersk Lavra, or “Monastery of the Caves.”

Founded almost 1,000 years ago, the sprawling structure is Ukraine’s oldest monastery and a popular destination for Orthodox pilgrims.

In a statement, the SBU said the raid was aimed at “countering the destructive activities of Russian special services in Ukraine.”

It also claimed that the monastery was a “center” for promotion of the “Russkiy Mir” (“Russian World”), a political/religious ideology embraced by Russian President Vladimir Putin.

According to the SBU, the raid uncovered several “suspicious” Russian nationals, large sums of cash, and “pro-Russian literature.”

The raid was condemned by the Russian Orthodox Church, which said it amounted to religious “persecution.”

“This act of intimidation … is almost certain to go unnoticed by those who call themselves the international human rights community,” church spokesman Vladimir Legoida said in a statement.

Dmitry Medvedev, deputy chairman of Russia’s Security Council, described those who had ordered the raid as “Satanists” and “enemies of Christ and the Orthodox faith.”

A week later, another monastery was raided in Ukraine’s western Transcarpathia region and the assets of several people linked to the church were frozen.

On Dec. 2, Kyiv went even further, announcing plans to introduce legislation that would effectively ban any churches affiliated with Russia.

The UOC, for its part, insists it has not broken any laws.

A church spokesman Metropolitan Kliment said in a statement, the UOC had “always acted within the framework of Ukrainian law.”

He went on to assert that Kyiv lacked “any legal grounds to put pressure on or repress our believers.”

The SBU, meanwhile, has stressed its adherence to “the principle of impartiality towards the activities of any religious denomination.”

The Ukrainian government, it said in a statement, “respects the right of every citizen to freedom of worldview and religion as defined by the Constitution of Ukraine.”

Nevertheless, the moves against the UOC have drawn criticism in the Western mainstream media, which until now has generally treated Kyiv with kid gloves.

On Dec. 6, Fox News commentator Tucker Carlson described Zelensky as a “dictator” who had “arrested dozens of priests for no justifiable reason … in clear violation of the Ukrainian constitution.”

Zelensky, he added, had “announced his plans to ban an entire religion, the Ukrainian Orthodox Church, and to seize its property—all for being insufficiently loyal to his regime.”

Donald Trump Jr., son of the former president and vocal critic of unconditional U.S. support for Kyiv, also weighed in on the issue.

“Zelensky is banning the Ukrainian Orthodox Church,” he said in a Dec. 3 social-media post.

In both Russia and Ukraine, the vast majority of the population identify as Orthodox Christians.

The Orthodox Church, which broke with Rome in the 11th century, is currently comprised of 14 self-governing (“autocephalous”) local churches around the world.

Historically, the archbishop of Constantinople (modern-day Istanbul) has served as the spiritual head of Orthodox Christians worldwide.

While he is considered the “first among equals” in the Orthodox hierarchy, the archbishop, also known as the “ecumenical patriarch,” does not wield authority outside his jurisdiction.

In the 17th century, Constantinople gave the Moscow Patriarchate the authority to appoint Orthodox bishops in Kyiv.

Ever since, the UOC, while enjoying de facto autonomy, has remained within the ecclesiastical jurisdiction of Moscow.

But this long-standing arrangement was shaken in February, when Moscow began sending troops into Ukraine to support pro-Russian separatists in the eastern Donbas region.

From the outset, Moscow’s “special military operation” in Ukraine has enjoyed the vocal support of Bishop Kirill, head of the Russian Orthodox Church.

Kirill, who is also patriarch of Moscow, has repeatedly stated that the “operation” was necessary to protect Russia—and Orthodoxy—from a corrupt and overtly hostile West.

Due to his controversial stance on the conflict, many UOC leaders have distanced themselves from the Russian Orthodox Church by omitting Kirill’s name from the liturgy during public worship services.

Nevertheless, many UOC members—from both the clergy and laity—have remained loyal to the Moscow Patriarchate, prompting charges by Kyiv that they are secretly working in the interests of Russia.

“Even after the conflict began, certain branches of the UOC maintained relations with the Moscow Patriarchate,” Pritchin, a senior research fellow at Russia’s Institute of World Economy and International Relations, said.

“This is why the Ukrainian government has taken these aggressive actions,” he added, “which seek to target parts of the church that remain outside its control.”

Putin, Kirill, and the ‘Russkiy Mir’

Kyiv has frequently accused the UOC of promoting the notion of the “Russkiy Mir,” an ideology that views Russia—in tandem with the Orthodox Church—as a bulwark against “corrupt” Western values.

It is a key feature of Putin’s foreign-policy doctrine, which seeks to protect Russian language, culture, and religion from perceived encroachment by the forces of “globalization.”

“The idea of the Ruskiiy Mir has cultural, historical, and religious aspects,” Pritchin explained. “Since the fall of the Soviet Union in 1991, it has become central to Moscow’s foreign policy.”

The concept is close to the hearts of both Putin and Kirill, who have repeatedly warned against Western encroachment—political, military, and cultural—on Russia and the Orthodox world.

In geopolitical terms, this can be seen in the steady eastward expansion of NATO, which, over the course of the last three decades, has inched ever closer to Russia’s borders.

In cultural terms, it can be seen in the West’s forceful promotion of “liberal” values that other parts of the world reject, particularly those pertaining to “LGBT rights” and so-called “gender identity.”

In a widely-quoted sermon in March, Kirill claimed that the Orthodox world was in a “metaphysical” struggle with supranational forces that demand that all nations “hold gay-pride parades.”

Earlier this month, Putin drew the fury of most Western media pundits when he approved legislation banning “LGBT propaganda.”

According to Pritchin, the positions held by Putin and Kirill reflect an ongoing “Orthodox revival” in Russia that began with the fall of the Soviet Union.

“In pre-Soviet times, Russian society was deeply Orthodox,” he said. “Under Soviet rule, the church was suppressed, although many Russians secretly adhered to the faith.”

“But since the fall of the Soviet Union, the Orthodox Church has undergone a dramatic revival,” Pritchin added. “It has come to play an important role, both socially and politically, in today’s Russia.”

In an effort to limit Moscow’s perceived influence, a new, more nationalist-minded Orthodox Church was recently set up in Ukraine to rival the Russia-linked UOC.

Dubbed the Orthodox Church of Ukraine (OCU), it was granted autonomy four years ago by Bartholomew I, the current archbishop of Constantinople.

At a ceremony in Istanbul in early 2019, the archbishop announced that Ukrainians could henceforth enjoy “the sacred gift of emancipation, independence, and self-governance, becoming free from every external reliance and intervention.”

UOC leaders, however, rejected the legitimacy of the new church, which they described as “schismatic,” “heretical,” and “anti-canonical.”

“This action will not bring anything to Ukraine except trouble, separation, and sin,” UOC spokesman Vasily Anisimov said at the time.

The move was also decried by the Russian Orthodox Church, which responded by severing ties with the ecumenical patriarch.

Putin, for his part, described the newly-created OCU as “a purely political, secular project.”

“Its main goal is to drive a wedge between the peoples of Russia and Ukraine and incite ethnic and religious tensions,” he said at the time.

Currently, only four autocephalous Orthodox churches—those of Constantinople, Greece, Alexandria, and Cyprus—are said to recognize the legitimacy of the OCU.

Russian Foreign Minister Sergey Lavrov has claimed that Washington pressured the ecumenical patriarch to legitimize the OCU in order to foment a “crisis in Orthodoxy.”

The Ecumenical Patriarchate of Constantinople declined to respond to The Epoch Times’ repeated requests for comment.