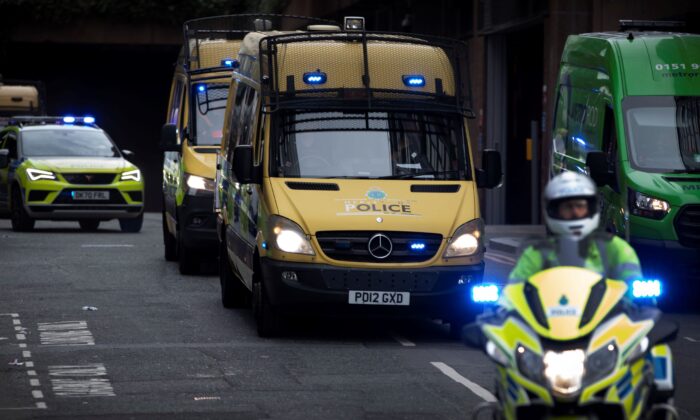 A van containing Paul Russell driving away from the court building after he appeared on the same day as Thomas Cashman at Liverpool Magistrates in Liverpool, England, on Oct. 3, 2022. (Colin McPherson/Getty Images)

LONDON—A man appeared in a court in the English city of Liverpool on Monday charged with the murder of a 9-year-old girl who was shot dead in her own home.

Thomas Cashman, 34, is accused of murdering Olivia Pratt-Korbel, who was fatally shot when a gunman chased another man into her house in Dovecot, east of Liverpool, on Aug. 22.

Cashman is also charged with the attempted murder of Olivia’s mother, Cheryl Korbel, who was wounded during the struggle, and Joseph Nee, a convicted burglar, whom the gunman was chasing.

The case has shaken the city, and last month people packed local streets for Olivia’s funeral.

Police said the deadly clash began when a gunman fired at two other men on the street. When Cheryl Korbel opened her door to see what was happening, one of the men forced his way into the home. The gunman then fired as Korbel tried to bar the door.

Cashman was remanded in custody and a trial is provisionally set for March 6 next year.