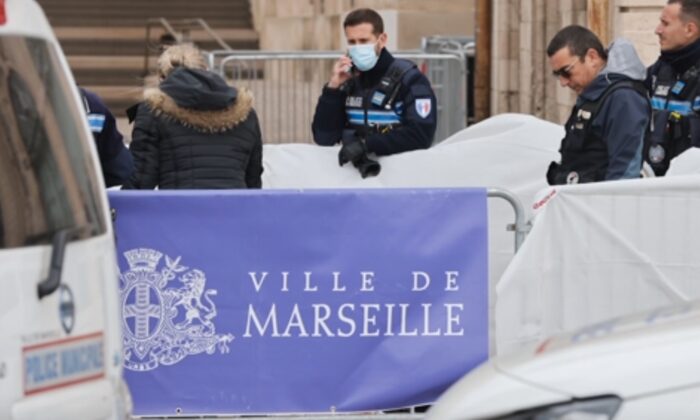 Police and investigators outside the town hall after a knife attack, in Marseille, France, on March 12, 2022. (AP)

MARSEILLE, France—A French man with a knife injured three police officers in the southern city of Marseille on Saturday, and was killed by police after repeatedly ignoring warning shots, authorities said.

The reason for the attack was unclear.

Interior Minister Gerald Darmanin described a “violent attack with a knife” and said police were able to “neutralize the victim and avoid the worst.”

Speaking from the site of the attack, Darmanin said the attacker was not known to police and had no police record. He said the officers tried various ways to warn him that didn’t work, and “then they opened fire and stopped him.”

City officials at the scene said three officers were injured and one was hospitalized.

The national antiterrorism prosecutor’s office said it is examining what happened before determining whether to open an investigation into terrorism. France has been hit by several deadly extremist attacks in recent years.

The attack took place in the Old Port of Marseille on the Mediterranean, not far from a site that is collecting aid for victims of the war in Ukraine, but authorities said there was no immediate sign of any link between the collection site and the attack.

US Military Base in Syria Targeted in Rocket Attack