Meta on March 10 announced a temporary change in its content policy that would allow users to express their views against Russia’s attack on Ukraine, allowing posts such as “death to Russian invaders.”

The Meta statement reads: “As a result of the Russian invasion of Ukraine, we have temporarily made allowances for forms of political expression that would normally violate our rules like violent speech such as ‘death to Russian invaders.’ We still won’t allow credible calls for violence against Russian civilians.”

On March 11, Russian prosecutors started a criminal case, asking a court to designate Meta—which owns Facebook and Instagram—as an “extremist organization” and prohibit its activities in Russia.

“A criminal case has been initiated … in connection with illegal calls for murder and violence against citizens of the Russian Federation by employees of the American company Meta,” Russia’s Investigative Committee said.

“Such actions of the [Meta] company’s management not only form an idea that terrorist activity is permissible, but are aimed at inciting hatred and enmity towards the citizens of the Russian Federation.”

Nick Clegg, the global affairs president of Meta, shared a statement on Twitter saying the policy is only applicable in Ukraine and is a temporary decision “taken in extraordinary and unprecedented circumstances.”

He said Meta has “no quarrel with the Russian people.”

Meta’s policies “are focused on protecting people’s rights to speech as an expression of self-defense in reaction to a military invasion of their country,” he said.

“The fact is, if we applied our standard content policies without any adjustments we would now be removing content from ordinary Ukrainians expressing their resistance and fury at the invading military forces, which would rightly be viewed as unacceptable,” Clegg continued.

He also noted that there is “no change at all” in Meta’s policies on hate speech on Russian people and that Meta “will not tolerate Russophobia or any kind of discrimination, harassment or violence toward Russians on our platform.”

Meta’s other services also are popular in Russia. Facebook last year had an estimated 7.5 million users and WhatsApp 67 million, according to researcher Insider Intelligence.

WhatsApp will not be affected, Russia’s RIA news agency cited a source as saying, as the messaging app is considered a means of communication not a way to post information. 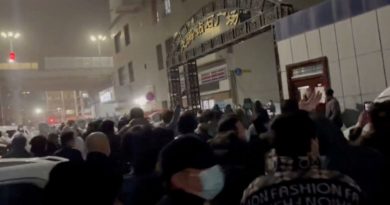