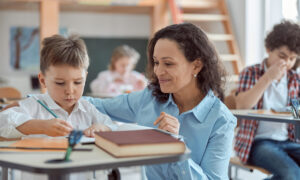 Australian psychologists have found a solution that could give worn-out parents new hope after it was shown the improvements in disruptive behaviour learned by the children had lasting results well after the new behavioural therapy ended, compared with existing treatments.

Clinical psychologist specialising in behaviour problems in children Georgie Fleming said they saw a sustained improvement in the kids aged between three and seven who got the specialised treatment they developed.

“At the same time, we saw a pattern of deterioration of the children who got the standard treatment,” the lead author of the University of New South Wales study Fleming said.

Their tailored treatment is an enhanced version of Parent-Child Interaction Therapy (PCIT), with three main areas that differentiated it from past strategies.

First, they coached parents to strengthen their relationship with their children by expressing warmth and affection.

“Things like sitting closer to their child during play, putting the ‘smile’ into their voice when they praise the child and doing things that are specifically intended to make the child laugh,” Fleming said.

Secondly, the researchers used a disciplinary system involving tokens rather than punishments.

“Basically, we identify behaviours that we want these children to do more of. Things like ‘listen to your parents when they ask you to do something, use gentle hands with your siblings and your friends.’”

“And for all the instances where kids are showing what we would call ‘prosocial behaviours,’ they get a token—some sort of small reward—which they accrue over time and are able to trade in for a whole menu of different rewards.”

The final way it differs from previous treatments is that the psychologists actively train the children in their emotional skills.

“There is robust evidence kids with callous-unemotional traits are underdeveloped in being able to recognise particular facial expressions, they’re not as good at picking up when someone is feeling scared or sad,” Fleming said.

“So we train them in the micro expressions that we universally show as humans and then build up these skills to get them to a place where they see somebody who’s in distress, and they’re able to respond prosocially.”

‘Biology is Not Necessarily Destiny’

The enhancements to the previous treatments were based on research led by Prof. Eva Kimonis.

She said that there’s a long-standing view that behavioural problems and mental disorders in children are hard to treat.

“But I think what this treatment does is offer hope, that these traits are responsive potentially to intervention when we do it young enough,” Kimonis said.

“So we don’t believe biology is necessarily destiny.”

Kimonis said that team have begun offering these specialised treatments to children.

“Georgie [Fleming] is already leading a project based on this research at Ingleburn Public School, which ensures kids that have these traits—and their parents and teachers—get access to this program in communities where they are less likely to have access to this sort of help.”

The researchers are looking at building a clinic at Condell Park Public School as a second site, and then promoting this program in the community of practitioners.

“A real novelty of how we’re delivering the program at the school is in involving the teacher to work with the parent to use consistent strategies. This means treatment gains are more likely to extend across home and school contexts.”