Most of Nova Scotia’s senior RCMP staff believed there were “dysfunctions” at their division prior to the 2020 mass shootings and felt abandoned by their superiors in the aftermath, according to a consultant’s report prepared last year.

The Sept. 30, 2021, summary of a “wellness assessment” of the staff was released publicly on Monday at the inquiry investigating the mass shooting. It says most of the 24 senior officers and civilian leaders interviewed last summer had complained about deficiencies in the Nova Scotia Mounties’ operational capacity before the shootings.

“Almost all spoke at length about the RCMP’s … major dysfunctions which they said had been allowed to exist over many years,” the report says.

The document was released as Lee Bergerman, the retired commanding officer for the province, testified Monday before the inquiry, which is examining how an alcoholic denturist with a record of domestic violence managed to create a replica police vehicle, arm himself with semi-automatic guns, and engage in a 13-hour rampage that resulted in 22 murders on April 18-19, 2020.

The summary says the wellness assessment was commissioned after reports of exhaustion, “lack of collaboration” among senior staff, and “overall purported low morale” reached RCMP national headquarters. The report, however, says interviewers made no attempt to verify the truth of what they were told.

RCMP staff told interviewers that funding formulas between the province and the Mounties hadn’t kept pace with the costs for emergency response teams.

“Many (senior staff) pointed to provincial authorities such as the ministers of justice … who they said had for years underfunded the RCMP” and who “are looking for a bargain from Ottawa but still want to have access to ‘ready resources … deployed whenever called.’”

Some of the officers told the Ottawa-based consultant, Quintet Consulting Corp., that sick leave for general duty officers sometimes went on “excessively,” and there was “little or no mechanism to replace missing resources without ‘robbing’ a person from somewhere else.”

Senior staff said there were chronic shortages throughout the division, leading to excessive use of overtime and additional burdens on healthy officers.

The public inquiry has heard testimony from RCMP commanders who said personnel shortages plagued their detachment and only four officers – rather than the expected six — were available to respond during the crucial, initial 45 minutes when the first 13 killings occurred in Portapique, N.S.

Meanwhile, the redacted summary has several participants in the confidential interviews describing top regional leaders as “a small clique of officers in a mutually supportive group … with others treated as outsiders.”

Some participants spoke about “favouritism, personalities and skewed performance ratings not based on competence” among the top officers at the division. However, other participants said they were satisfied with the regional leadership.

Lucki has already apologized for the sharp tone she used when she addressed regional staff following an Aug. 28, 2020, news conference, during which she criticized divisional leaders for not releasing details of the guns used by the killer.

The commissioner—who has faced accusations she was acting under pressure from the Liberal government seeking to promote its gun-control measures—has said she was frustrated with the Nova Scotia division over its communication with the public because media were reporting facts before the RCMP released them.

Bergerman testified on Monday she never received a copy of the wellness assessment, noting she had left her position last fall, shortly after its completion. She said the report wasn’t what she had in mind when she had requested it.

“I was looking for what strategies we can put in place to help people heal,” she said.

Bergerman also testified that she disagreed with the public release of the summary. “It’s unfortunate because the people who participated thought it would be confidential.”

Scientist Discovers What May Cause COVID-19 Vaccine-Linked Blood Clots 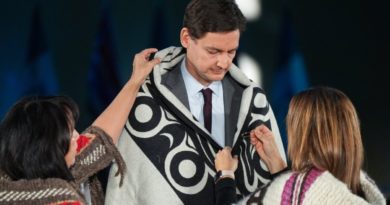 In Shoes From His Father, New BC Premier David Eby Is Off and Running