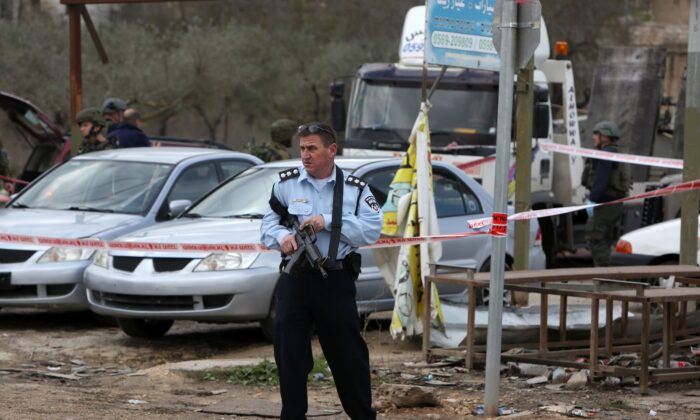 An Israeli policeman stands as guard near the West Bank city of Nablus, Israel, on Dec. 31, 2015. (Jaafar Ashtiyeh/AFP via Getty Images)

Police officers managed to shoot dead a gunman who killed at least four people in a central Israeli city on Tuesday, “preventing a much more serious attack,” a police spokesperson said.

The officers had been “at routine work, they encountered the terrorist (and) managed to neutralize him,” said the spokesperson, Eli Levy.

The attack by the man on a motorcycle was Israel’s second mass shooting rampage this week.

While circumstances were not immediately clear, the shooting appeared to be the latest in a string of attacks by Arab assailants ahead of the Muslim holy month of Ramadan and the anniversary of last year’s Gaza war.

Police said in a statement that a preliminary investigation found that the gunman was armed with an assault rifle and opened fire on passersby before he was shot by officers at the scene.