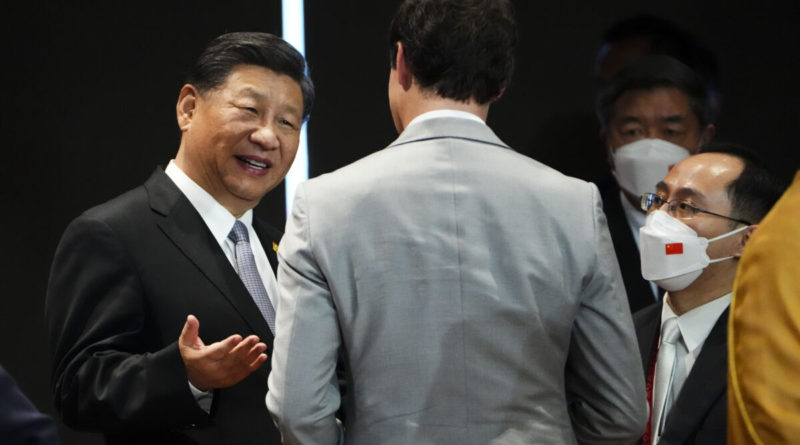 
Politicians and China experts have offered their observations on Chinese Leader Xi Jinping’s confrontation with Prime Minister Justin Trudeau at the G20 Summit on Nov. 16, when Xi told Trudeau that he shouldn’t have “leaked” details of their conversation to the media the day before.

“In exchanges like this, body language is extremely important,” said Conservative Sen. Leo Housakos on Twitter on Nov. 16.

Housakos’ comment was in reaction to a comment by China expert Charles Burton the same day, that in one part of the exchange, Xi made a “menacing threat to Trudeau,” telling the prime minister that “otherwise it is hard to say what will happen.”

“Couple Justin Trudeau’s body language with the additional threat outlined [by Burton] and there’s no way this can be characterized as anything other than our Prime Minister once again showing deference to a tyrant,” Housakos said.

A video of the two leaders’ brief interaction was captured by reporters on the sidelines of the G20 summit in Bali, Indonesia.

“Everything we discuss has been leaked to the paper; that’s not appropriate,” Xi told Trudeau through an interpreter.

“That’s not how, the way the conversation was conducted. If there is sincerity on your part …” Xi continued, finishing the sentence without translation, saying that “we will proceed with mutual respect, otherwise the result will be hard to say.”

Trudeau spoke to Xi on Nov. 15, and his office later said the Prime Minister had raised concerns about China’s interference in Canada, as well as media reports of unofficial Chinese police stations operating in Toronto.

Trudeau’s office said the pair had also spoken about North Korea’s missile launches, Russia’s invasion of Ukraine, and the UN summit on biodiversity that China is hosting in Montreal next month.

David Mulroney, Canada’s former ambassador to China, said the episode was a “staged, public rebuke for the leader of a vassal state.”

In Ottawa, Innovation Minister Francois-Philippe Champagne said he was “pleased” that the prime minister was “standing up as he always does for Canada” and that “we won’t tolerate these types of things with respect to interference.”

A Nov. 7 Global News report alleged that the Canadian Security Intelligence Service (CSIS) had warned Prime Minister Justin Trudeau and several cabinet ministers, in a series of briefings and memos starting January 2022, about CCP interference in Canada that can include “covert funding to influence election outcomes.”

The report said at least 11 candidates, whose party affiliations were not disclosed, received CCP campaign funding in the 2019 federal election.

The Conservatives are calling on the Liberal government to disclose the identity of those 11 candidates. The Tories have been critical of the Liberals’ approach to China relations, including the cabinet’s abstention from voting in a House of Commons motion recognizing China’s persecution of the Uyghur minority group as genocide.

In recent comments about her government’s soon-to-be-announced Indo-Pacific policy, Foreign Affairs Minister Melanie Joly described China as “an increasingly disruptive global power,” saying it “seeks to shape the global environment into one that is more permissive for interests and values that increasingly depart from ours.”

She acknowledged China is guilty of human rights abuses, but said Canada also has trade ties with the country, saying she believes “in diplomacy.”

“There’s $100 billion worth of trade with China,” she said. “We will challenge China when we ought to and we will cooperate with China when we must. “Its sheer size and influence makes cooperation necessary to address the world’s existential pressures.”

Andrew Chen, Peter Wilson, and The Canadian Press contributed to this report.

At Least 15 Die in Multiple Attacks Near US-Mexico Border