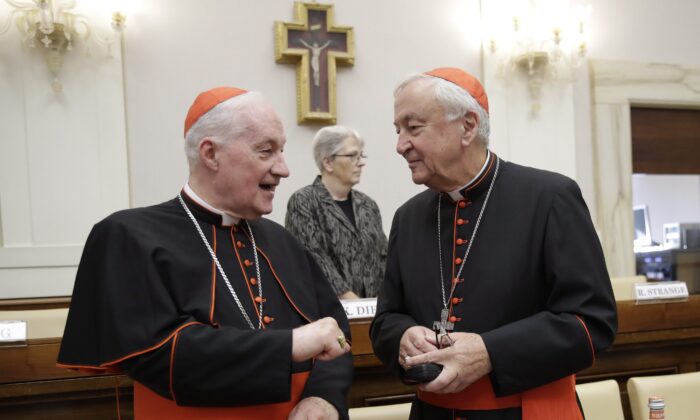 Cardinal Marc Ouellet, left, talks with Cardinal Vincent Nichols, before the start of an event at the Vatican on Oct. 12, 2019. (The Canadian Press/AP, Alessandra Tarantino)

Quebec Cardinal Marc Ouellet is being accused of sexual assault in a class-action lawsuit against the Roman Catholic Archdiocese of Quebec.

In court documents introduced today in Superior Court, an unnamed woman accuses the prominent cleric of kissing her at a cocktail reception in 2008 and sliding his hand down her back and touching her buttocks.

The allegations are part of a series of claims made against clergy members that are included in two class-action lawsuits against the church that have been authorized by a judge.

Montreal-based law firm Arsenault Dufresne Wee Avocats says that in the first lawsuit, against the Archdiocese of Quebec, about 101 alleged victims have accused about 88 priests or other clergy members of sexual assault.

In the second lawsuit, against the Brothers of the Christian Schools of Francophone Canada, 193 alleged victims have accused 116 members of that organization of sexual assault.

The documents tabled in court today contain the detailed accusations against the clergy members—including Cardinal Ouellet—following the authorization of the class actions.

Why Didn’t O’Toole Win the Election? Pundits Weigh In