Prime Minister Justin Trudeau has been offered the gift of his own likeness some 17 times since becoming prime minister, including once by the president of China.

The portraits and photos, along with a myriad of vases, wine bottles and Star Wars paraphernalia, are among the more than 400 gifts valued at over $200 that Trudeau has declared to the federal ethics commissioner since late 2015.

Among the representations “of myself,” as they are commonly described in Trudeau’s disclosures, are a portrait seal from Chinese President Xi Jinping and a painting on goat skin offered by Abiy Ahmed Ali, the prime minister of Ethiopia.

There is also a 3D crystal collage of Trudeau and former U.S. president Barack Obama, and cut-outs of him and his wife, Sophie Grégoire Trudeau, both given by Canadian artists.

The Prime Minister’s Office, when asked, did not specifically address the question of what happens to all these images of Trudeau. For example, do any — such as the oil painting titled “Happy Moments” — hang in his residence at Rideau Cottage? They said simply that some gifts are kept or stored while others are donated or forfeited.

Roy Norton, the chief of protocol at Global Affairs Canada from 2016 until 2019, told The Canadian Press he doesn’t read anything into the portraiture trend other than a desire “to get more personal and less costly.”

Toward that same goal, Norton said in an interview, the Canadian protocol office would try to match gifts offered by Trudeau with the recipient’s tastes.

Former German chancellor Angela Merkel was a Bach fan, so she got a box set of concertos performed by Glenn Gould, he said, while one of Trudeau’s gifts to former U.S. president Donald Trump was a 1980s photograph of Trump with Pierre Elliott Trudeau in New York.

“Trump likes pictures of himself, so that was a gift that was seemingly very well received,” Norton said. The president told media at the time: “What a great picture.”

Norton explained that gift exchanges are a highly orchestrated bureaucratic affair, adding that Canadian prime ministers would just as soon not receive any gifts because of the potential for negative attention.

“No leader of a democratic country is interested in being compromised or having to spend a fraction of the news cycle defending a gift received or a gift given,” he said.

Trudeau has received 110 gifts from other countries’ heads of state or governments since he became prime minister, an analysis of the public records shows, with a major drop-off during the pandemic as travel became far less frequent.

Jordan’s King Abdullah II has been the most generous of foreign officials, presenting 10 gifts to Trudeau ranging from a handmade leather saddle to “sculptural plant vessels” to jars of honey. The king even had a box of skin care products dropped off for Trudeau while on a personal visit to Canada last year, during which the Prime Minister’s Office says the two did not meet.

French President Emmanuel Macron came in second with seven presents for the prime minister, including a limited-edition Star Wars X-wing pen—a gift perhaps outshone by Obama’s 2016 offering of a script for the film “The Force Awakens,” signed by director J.J. Abrams.

More than 140 gifts declared by Trudeau were actually for his wife or their children, such as ride-on scooters and plush toys of Bo “The First Dog” gifted by Obama.

And several dozen consisted of an “introduction to” various clothing, accessory and jewelry designers, like a pair of fight gloves offered by Rival Boxing Gear in 2018. Still others were swag bags containing various branded items, such as a Jack Daniel’s T-shirt and hoodie offered alongside a bottle of whiskey.

Trudeau had to forfeit 20 gifts over the past few years, including three paintings of himself, an Arabian cloak and a Seiko watch from the Japanese prime minister, because they were worth more than $1,000.

He reimbursed part of the costs of two gifts so that he could keep them—an e-bike offered by Chinese Premier Li Keqiang in 2016 and an etching by Inuit artist Annie Pootoogook from the president of Nunavik Tunngavik Inc. in 2017. He also received from Li a Huawei Mate 10 Pro Android phone in 2017.

Lest the Chinese electronic devices arouse suspicion, Norton said the RCMP scans everything the prime minister receives and sometimes even takes items apart looking for anything compromising. And a spokeswoman for Trudeau said all gifts sent to him are security cleared.

The ethics disclosures do not include items given to Trudeau that are worth less than $200, such as the trinkets and letters he often receives from the general public. 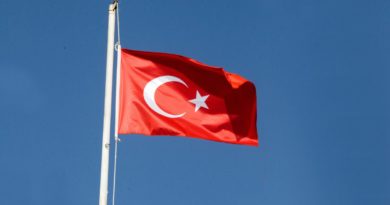 In a First, Turkish Court Arrests Journalist Under ‘Disinformation’ Law