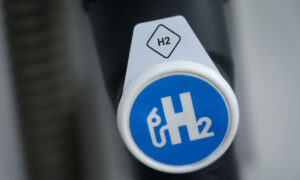 Researchers at the University of New South Wales in Sydney have successfully retrofitted a diesel engine to run as a hydrogen-diesel hybrid, cutting down C02 emissions by around 85 percent.

The move comes as part of a wider push for governments to electrify their nation’s transport networks as part of the net-zero movement.

The team, led by Prof. Shawn Kook of the School of Mechanical Engineering, spent 18 months developing the hydrogen-diesel direct injection dual-fuel system, which can run using 90 percent hydrogen as fuel.

The researchers are hoping their discovery can be used to retrofit heavy equipment—in a matter of months—in the fields of transportation, agriculture, and mining.

“At mining sites, where hydrogen is piped in, we can convert the existing diesel engines that are used to generate power,” said Kook in a statement.

He said hydrogen storage systems need to be integrated into fuel injection systems.

“I do think the general technology with regards to mobile hydrogen storage needs to be developed further because, at the moment, that is quite a challenge,” he said.

The research team is hoping to commercialise the system within 12 to 24 months and is keen to consult with investors, noting that industrial locations where hydrogen fuel supply lines are already in place, including mining sites.

Kook also said retro-fitting diesel engines were much faster than developing completely new hydrogen fuel cells, which may need another decade until they are commercially viable.

He also said, in a paper published in the International Journal of Hydrogen Energy, that the new system can reduce emissions by 90 grams per kWh—85.9 percent below the amount produced by the diesel-powered engine.

Hydrogen is a key puzzle piece in the push for net-zero and the phasing out of coal-fired generation.

An energy grid powered by renewables requires enormous amounts of storage—and billions of dollars and materials—to provide backup electricity when the wind is not blowing, or the sun is not shining.

Although battery technology is improving, there are still numerous drawbacks; for example, the world’s largest battery system, the FPL Manatee Energy Storage Center in Florida, can provide only two hours of power to approximately 329,000 homes at a time.

For renewable energy systems like pumped hydro, the storage element is simply the building of dam systems to store huge volumes of water, which is then pumped back through turbines to generate electricity. However, not every country or region has access to the right environmental conditions to take advantage of hydro.

So governments have invested billions into hydrogen technology as another solution to complement battery storage.

Instead of funnelling excess electricity into batteries, they are fed through electrolysers (also an electricity-intensive process) which then create hydrogen to fill reservoirs, which can be used as a new energy source or synthetic fuel.

Yet like many new technologies in the net-zero push, it is still in the early days of its development and not viable for widespread use.

“The main problem really is hydrogen is very low density,” said Nick Kastelstein, oil and gas engineer at GPA Engineering. “So it’s a third the energy density of methane, and it takes a lot of energy to compress it.”

Canadians Heading to the Polls to Choose Next Federal Government