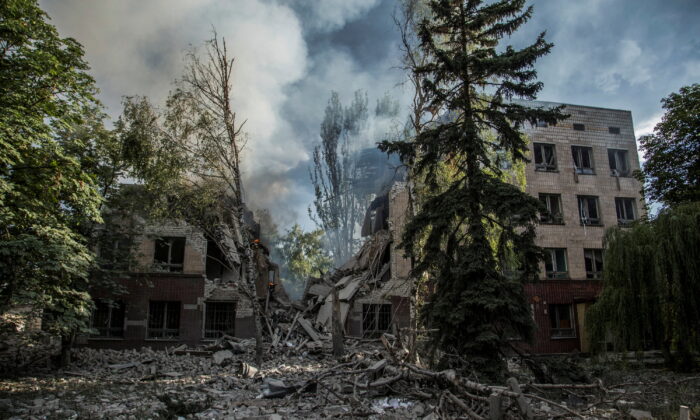 Smoke rises over the remains of a building destroyed by a military strike, as Russia’s attack on Ukraine continues, in Lysychansk, Luhansk region, Ukraine, on June 17, 2022. (Oleksandr Ratushniak/Reuters)

There was no immediate response from Ukraine on the Russian claim, which, if confirmed, would mark a significant milestone for Moscow on day 130 of the war.

After pulling back from northern Ukraine and the capital Kyiv in the spring, Russia has focused on driving Ukrainian forces out of the eastern Luhansk and Donetsk regions where Moscow-backed separatists have been fighting Kyiv since Russia’s first military intervention in Ukraine in 2014.

The Russian defense ministry said Shoigu had informed Putin of the “liberation” of the Luhansk region thanks to the capture of Lysychansk, once a major coal mining hub.

“As Army General Sergei Shoigu reported [to Putin], following successful military operations, the Russian armed forces, together with units from the people’s militia of the Luhansk People’s Republic, gained full control over the city of Lysychansk,” the ministry said in a statement.

The ministry had said earlier on Sunday that its troops had captured the villages surrounding Lysychansk, encircling the area, and were fighting inside the city.

Calls to the Ukrainian General Staff and Defence Ministry went unanswered. The ministry did not immediately respond to an emailed request for comment.

The Russian defense ministry added that it had struck military infrastructure in the eastern Ukrainian city of Kharkiv, as well as a base used by foreign fighters on the outskirts of Mykolaiv in the country’s south.

Canadian Premier Says Biden Should Opt for Oil From His Province Over Saudi Arabia, Venezuela