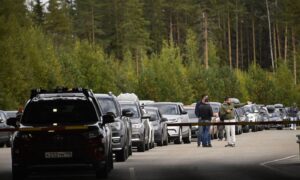 Men have reportedly been fleeing Russia in their droves after the nation’s leader Vladimir Putin announced a partial mobilization of the army on Sept. 21 amid its ongoing war with Ukraine.
Putin’s announcement, the first of its kind since World War II, came less than a day after pro-Russian leaders in four Ukrainian provinces: Donetsk, Luhansk, Kherson, and Zaporizhzhia announced plans to hold separate referendums on whether or not to join Russia.
Russia has been dealt a series of blows in recent weeks amid a Ukrainian counteroffensive that has seen the latter take back large swathes of the northeastern Kharkiv region….