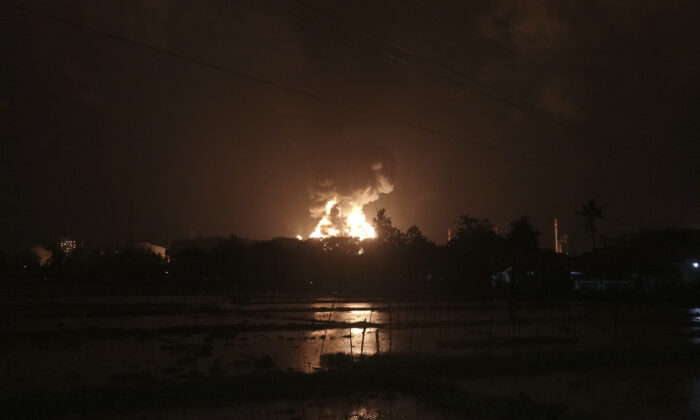 The sky glows from the fire that razes through an oil refinery owned by the national oil company Pertamina in Cilacap, Central Java, Indonesia, on Nov. 13, 2021. (Agus Fitrah/AP Photo)

JAKARTA, Indonesia—A fire at a gasoline storage at the largest oil refinery on Indonesia’s Java island near Jakarta on Saturday prompted the evacuation of at least 80 residents living nearby, the national oil company Pertamina said.

Pertamina, Indonesia’s biggest state-owned enterprise and energy company, said the fire at the Cilacap refinery started at one of the 228 gasoline tanks used to accommodate crude at 7:20 p.m.

It said the cause of the fire was not known. There were no casualties reported.

Pertamina said it was taking efforts to extinguish the fire. The residents were evacuated to a nearby village hall and a mosque, it said.

Cilacap is one of six Pertamina refineries with processing capacity of 270,000 barrels a day.

After Crippling the Energy Sector, Liberals Are Now Targeting Farming