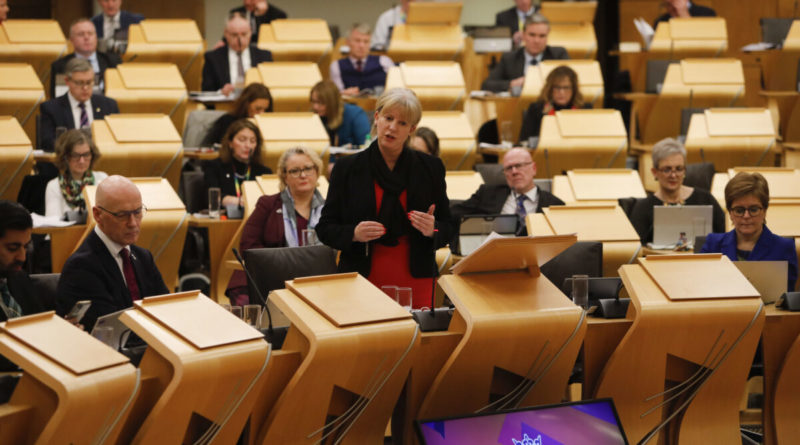 
Scotland’s Gender Recognition Reform Bill has passed, though the UK government said it may block it.

Scotland has now become the first country in the UK to back a process of self-ID for legally changing gender.

The Gender Recognition Reform (Scotland) Bill, will allow anyone over the age of sixteen to self-ID via a statutory declaration to obtain a new birth certificate, which changes the recording of their registered sex at birth to their chosen gender.

MPS passed the bill by 86 votes to 39, with the bulk of First Minister Nicola Sturgeon’s SNP and Labour voting for it, along with all of the Greens and Scottish Lib Dem MPs.

Critics of the legislation say that a self-identification system could be exploited, or male prisoners may abuse the system. The proposals have encountered recent criticism from the UK government and the Equality and Human Rights Commission (EHRC), which in October called for more consultation with all those affected by proposed changes.

Women’s groups as well as the U.N. Special Rapporteur on violence against women and girls, Reem Alsalem, have raised grave concerns that it will open up women’s services and private spaces to abuse (pdf).

Kate Coleman runs the organisation Keep Prisons Single Sex, which was set up in 2020 to campaign for the right of female prisoners to single-sex provision.

Half of Scotland’s transgender prisoners only identified as women after they were put behind bars.

“There will be an impact on women and girls, but the Scottish Government has no interest in either implementing measures to mitigate against this impact, or for providing for data collection to monitor the effect of the Bill in key areas,” Coleman told The Epoch Times in an email.

She added that this Bill makes “significant and substantive changes and ones which the Scottish electorate are increasingly expressing grave concerns over.”

“Scottish Parliament owed it to the electorate to give careful consideration to this legislation and to conduct Stage 3 in accordance with the highest standards of parliamentary process. Unfortunately, only a minority of MSPs were seemingly aware of these duties,” said Coleman.

“Amendments making reasonable provision for data collection to monitor the effects of this Bill, including in the areas of healthcare and criminal provision were voted down.  Amendments seeking clarification over what is meant by “living in the acquired gender” were voted down, she added.

Scottish Secretary Alister Jack said that the UK government could consider taking it to the Supreme Court.

“We share the concerns that many people have regarding certain aspects of this Bill, and in particular the safety issues for women and children,” he said.

“We will look closely at that, and also the ramifications for the 2010 Equality Act and other UK-wide legislation, in the coming weeks—up to and including a Section 35 order stopping the Bill going for Royal Assent if necessary,” he added.

Before the Bill passed, MSPs spent 24 hours this week debating it until 1:15 a.m. on Thursday.

On Wednesday, SNP MSP Michelle Thomson tabled her own amendment that would have stopped alleged sex offenders from changing their legal sex during court proceedings, preventing a situation where a raped woman would be forced to give female pronouns to her attacker.

However, the amendment was defeated, with SNP, Green, and Scottish Lib Dem MPs voting against it. Eight SNP MSPs voted for the amendment.

Scottish Conservatives Russell Findlay also pushed for the total exclusion of anyone with a conviction of rape, child sexual abuse, or other sexual offences from being allowed to use the new proposed system of obtaining a Gender Recognition Certificate (GRA).

That was defeated by 59 votes to 64 with two abstentions.

Under the new plans, the age people can apply to the gender recognition process will be reduced from 18 to 16. Furthermore, the time period applicants need to live in the acquired gender will be reduced from two years to three months, with the requirement for a medical diagnosis and evidence removed.

There will be no requirement under the bill for an applicant to undergo surgery or hormone therapy and it will also simplify the process to change the gender on birth certificates.

‘Sex is not, as some would like to imagine, binary and immutable,” said Maggie Chapman of the Scottish Greens shortly before the Bill passed.

Conservative Pam Gosal, who voted against the Bill said that “it risks safe spaces for women and girls, opens single-sex spaces up to abuse by predatory males, and gives sex offenders the right to change gender based on self-ID.”

The SNP said it was proud the legislation had passed.

SNP MSP Joe FitzPatrick said: “I am delighted and proud to see this piece of legislation pass through Holyrood—it’s been a long time in the making and will make such a positive difference to trans people in Scotland.”

Scottish Trans Alliance, an organisation that works for gender identity and gender reassignment equality and rights in Scotland previously said on Twitter that the “current application process for a Gender Recognition Certificate (which can be used to change the sex on a birth certificate) is broken and unfair.”

“This is precisely why many countries around the world have moved to simple, administrative model of self-declaration. Trans people know ourselves better than anyone else, and many leading human rights bodies agree that we should be the ones to decide how we want to be recognised,” it added.

The Epoch Times contacted the Scottish government for comment.

Death Toll From Migrant Shipwreck Off Tunisia Rises to 17