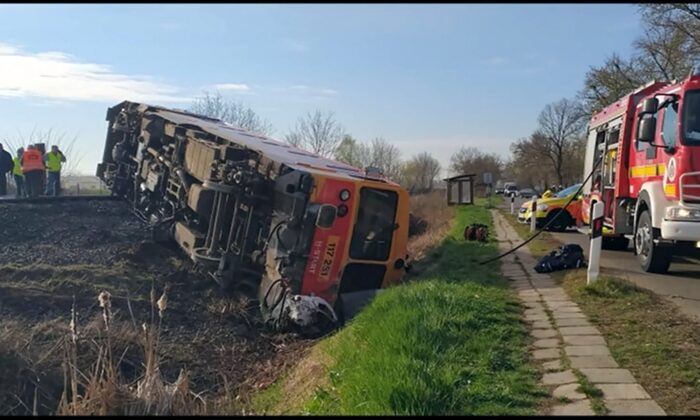 In this video still, a van drove onto the train tracks and was struck by a train in southern Hungary, on April 5, 2022. (Csongrad-Csanad County Police Handout/Screenshot via The Epoch Times)

The accident occurred just before 7 a.m. in the town of Mindszent. Police said a van drove onto the train tracks and was struck by a train, which derailed from the force of the collision.

In a statement, Hungarian state railways indicated that all those killed had been traveling in the van. It said that 22 people were on the train at the time of the collision. Two people were seriously hurt and eight others suffered mild injuries.

The Csongrad-Csanad county police said they had closed the entire width of the road during the on-site inspection and rescue. Traffic was diverted to surrounding streets.

Tommy Robinson Due at High Court for Questions Over Finances

‘Civilization May Not Survive’ War With China and Russia