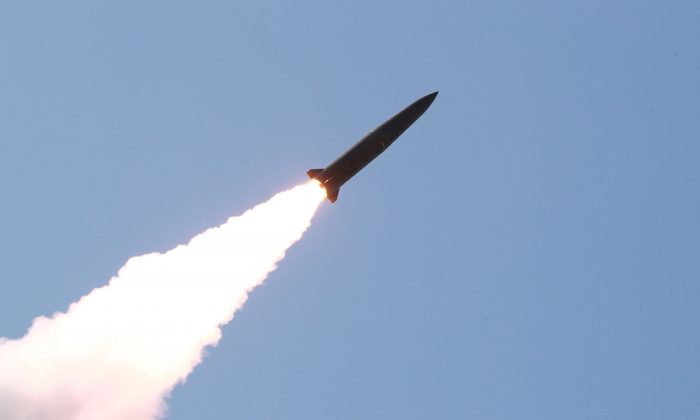 A missile is seen launched during a military drill in North Korea, in this photo supplied by the Korean Central News Agency (KCNA) on May 10, 2019. (KCNA vie Reuters)

The launch came a day after U.S. and South Korean officials said the North fired short-range weapons presumed as cruise missiles into its western sea over the weekend.

The North’s weapons demonstrations come amid stalled nuclear negotiations with the United States. Talks faltered after the collapse of Kim Jong Un’s second summit with former President Donald Trump in February 2019 where the Americans rejected North Korean demands for major sanctions relief in exchange for a partial surrender of their nuclear capabilities.

The North has so far ignored the Biden administration’s efforts to reach out, saying it won’t engage in meaningful talks with the U.S. unless Washington abandons what Pyongyang sees as “hostile” policies, which clearly refers to the U.S.-led sanctions and pressure over its nuclear program.

Kim’s sister last week berated the United States over its combined military exercises with South Korea, describing the drills as an invasion rehearsal and warned Washington to “refrain from causing a stink” if it wants to “sleep in peace” for the next four years.

MPs May Only Get a Vote on the ‘Concept’ of Vaccine Passports, UK Minister Says