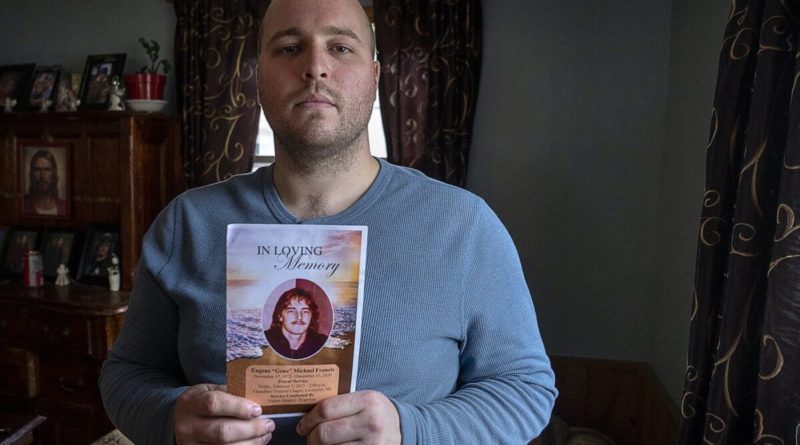 
Geno Francis loved most things about fishing on the high seas, but his son says that in his final year, fear overshadowed that passion.

“My father said, ‘After this trip, this was it,’ because it was quite dangerous,” Michael Francis said during a recent interview at his home in Milton, N.S., a few weeks before the second anniversary of the sinking of the Chief William Saulis.

The bodies of Eugene (Geno) Michael Francis, Aaron Cogswell, Leonard Gabriel, Dan Forbes and captain Charles Roberts were never recovered after the 17-metre vessel capsized on Dec. 15, 2020, just off Delaps Cove, about 50 kilometres north of Digby, N.S. The body of crew member Michael Drake was swept up on the rocky shoreline.

Two years later, Francis and Lori Phillips, the mother of Cogswell, say Dec. 15 is a date that provokes painful memories, unanswered questions and frustration over a Transportation Safety Board investigation that still hasn’t officially delivered its findings.

They say they want details released about how the scallop boat’s stability was affected by modifications, what oversight role Transport Canada played in certifying and overseeing the vessel and what safety measures are needed to save lives in the future.

Meanwhile, for the 26-year-old Francis, there are nagging memories of his father’s uncharacteristic anxiety during the final months of his career at sea.

Sitting in his living room, he recalled a man who in younger days returned home with happy memories and captivating stories about strange fish hauled on board. On shore, the two would set off together to the rivers and shorelines, carrying on the father’s passion—common in his Mi’kmaq community—of fishing for eel and mackerel.

But in the last year, Francis said his father repeatedly told his son after trips that he was fearful aboard the Chief William Saulis because it was “very tippy,” particularly after it was modified with a steel A-frame and other structural changes to convert it into a scallop dragger.

“That boat, specifically, he told me many times how it took on water and it wasn’t really smooth sailing,” said Francis. “After the modifications, I worried even more about whether that boat was meant to have all that weight and all that gear on it.”

Francis said he believes Transport Canada should have played a more active role in ensuring stability assessments were carried out. “They need to be more vigilant, and more thorough in their investigations and inspections,” he said. “I would say the rules are pretty loosely enforced now.”

Stability has repeatedly emerged as a contributing factor in fishing tragedies over the past 15 years.

According to the safety board’s website, stability has been a factor in the sinking of five vessels since 2007, including the 2020 sinking of the fishing boat Sarah Anne off Newfoundland’s south coast, which claimed four lives.

After three crewmen died in the capsizing of the Caledonian off the west coast of Vancouver Island in 2015, the board recommended the federal Transport Department “require that all small fishing vessels undergo a stability assessment and establish standards to ensure the stability information is adequate and readily available to the crew.”

According to the TSB’s website, the safety agency followed up annually to see whether the federal regulator had taken actions to ensure stability assessments were carried out but ranked the regulator’s response as “unsatisfactory.”

According to Transport Canada’s fishing vessel regulations, vessels like the Chief William Saulis are required to have a stability assessment if they “have undergone a major modification or a change in activity that is likely to adversely affect its stability.” It defines “major modification” as a change that substantially alters the capacity of the vessel or “the nature of a system on board” the boat, or that affects its integrity.

Hicham Ayoun, a spokeswoman for Transport Canada, said in an emailed response that the Chief William Saulis passed an inspection in April 2017, about three months before the rules came into force that required stability assessments if “major modifications” were made.

Ayoun wrote it was up to the owners to “ensure the vessel meets all current regulatory requirements and is operated safely.” However, Ayoun also said Transport Canada has determined the vessel didn’t break any safety regulations.

The boat’s owner, Yarmouth Sea Products, said in a news release in 2020 after the sinking that all of its “obligations for the maintenance and certification of the safety equipment on the vessel were up-to-date and valid at the time of the incident.”

Jocelin d’Entremont, the lawyer who represents the owner, said the company has no comment and is awaiting the results of the Transportation Safety Board investigation.

Phillips said in a recent interview she also heard about misgivings from her son before the final voyage.

There is a history of fishing in her family, but she has lost faith in the safety of the industry. “I’d like to see boats randomly pulled and go for Transport Canada inspection,” she said.

Both Francis and Phillips also argue the dragger, which sank in relatively shallow waters near the coast, should have been brought to the surface shortly after the disaster by the safety agency. “They could have seen defaults (in the boat) … especially if they had dragged it out as soon as they discovered it,” Francis said.

Meanwhile, as Thursday’s anniversary approaches, memories are coming back to families of the Christmas when their loved ones didn’t return in 2020.

Phillips has helped create a memorial overlooking Delaps Cove, where she and others will gather. Francis says his father’s gravestone is in nearby Liverpool, but he’s conscious there is no body beneath it.

“That’s one of the toughest things about this …. It’s not really a complete sense of closure because you never get the body back. You never get his ashes to spread or to put to rest,” he said.