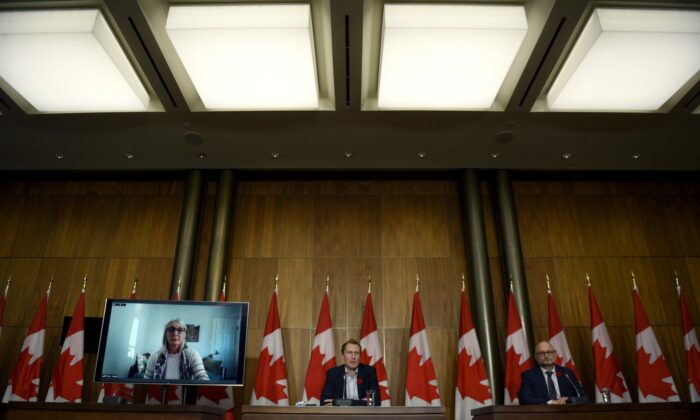 Minister of Crown-Indigenous Relations Marc Miller, centre, Minister of Justice David Lametti and and Minister of Indigenous Services Patty Hajdu, appearing via video conference at left, participate in a news conference regarding the order from the Canadian Human Rights Tribunal to compensate Indigenous children and their families, in Ottawa, on Oct. 29, 2021. (The Canadian Press/Justin Tang)

The panel is urging the parties to continue negotiating in a decision released today.

In 2019 the tribunal ordered Ottawa to compensate children and families three years after ruling that Ottawa had discriminated against First Nations children for years by not properly funding child welfare services on reserves.

The federal government, Assembly of First Nations and lawyers for two related class-action lawsuits, announced a deal to pay that compensation in January.

It initially awarded $40,000 to each child and their families who suffered.

However the tribunal is concerned with the timeline claimants have to opt out of the compensation and whether all children will receive the full amount.

US Probing Deaths at Plane Takeoff in Kabul