Tonga’s government has called for “immediate assistance” after a massive eruption by a nearby undersea volcano on Saturday, which was followed by a destructive tsunami, an official has said via satellite phone.

The Australian and New Zealand governments dispatched surveillance flights to the Pacific island on Monday to help restore communications and assess the damage.

Parliament Speaker Lord Fakafanua said via satellite phone early Monday that the COVID-19-free but ash-covered nation is in need of COVID-safe support to ensure enough fresh drinking water and food, and that internet remains down due to damage to an undersea cable.

“Many areas were affected by substantial volcanic ashfall. Communications remain down and the full extent of the harm to lives and property is currently unknown,” Fakafanua said in a statement shared by Tonga-based reporter John Pulu on social media.

He said that details about Tonga’s official disaster relief fund would be announced soon, and that all relief funds will need to be verified “to ensure the help kindly offered reaches those in need.”

Australia’s Minister for the Pacific Zed Seselja said that surveillance showed no mass casualties from the tsunami, and that Tonga’s airport “appears to be in relatively good condition,” although there has been “significant damage” to roads and bridges.

There are hopes that the undersea cable will be restored by next week.

The Hunga-Tonga-Hunga-Ha’apai volcano ejected a plume of ash, gas, and steam at least 20 kilometers into the atmosphere around 5:10 p.m. local time on Saturday in a one-in-1000 year event, and then again around 5:26 p.m., followed by tsunami waves, which hit and flood parts of the island, including its capital Nuku’alofa.

The volcano has been erupting regularly over the past few decades, but the rare atom-bomb scale eruption on Saturday was felt as far away as Fiji, New Zealand, the United States, and Japan. Tsunami warnings and evacuation orders were also issued in many Pacific countries. Two people drowned off a beach in Northern Peru due to high waves caused by the tsunami.

“This is an eruption best witnessed from space,” Cronin said.

“To help on the ground, we’ve made half a million dollars available for immediate needs, but this is very preliminary. We know more will be needed and we stand ready to support our friends and family in Toga,” she added. 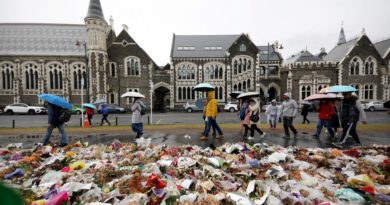