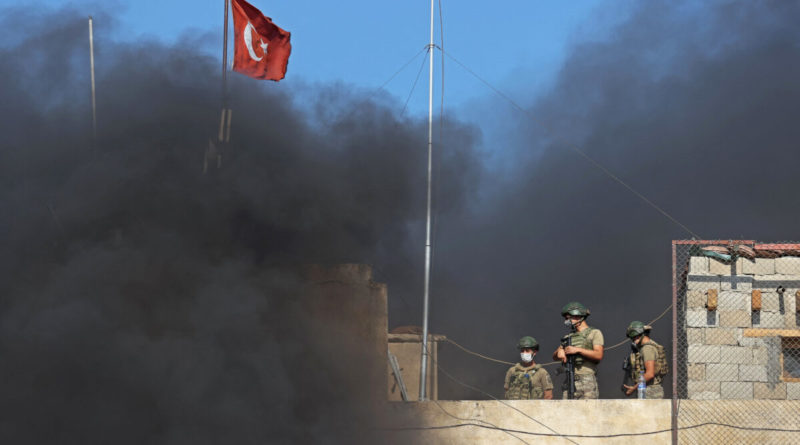 
At least three people were killed on Nov. 21 in a series of mortar attacks in Turkey’s southern Gaziantep province, located adjacent to Syria, according to the Turkish Interior Ministry.

The ministry has blamed the cross-border attacks on the Kurdish YPG, the Syrian offshoot of the Kurdistan Workers Party (PKK).

“According to initial information, three citizens, including a child and a teacher, lost their lives,” Soylu was quoted as saying by Turkey’s official Anadolu news agency.

Turkey, he added, would respond to the deadly bombardments “in the strongest possible way.”

One day earlier, eight Turkish security personnel were injured in a cross-border mortar attack in Kilis province, which neighbors Gaziantep to the southwest, according to Ankara officials.

The PKK, of which the YPG is the Syrian affiliate, was originally founded in the late 1970s. Currently based in northern Iraq’s Qandil Mountain Range, the group claims to seek the establishment of an independent Kurdish state in the region.

Over the past 40 years, the PKK has staged numerous attacks—on both civilian and military targets—inside Turkish territory, resulting in thousands of deaths.

Turkey, the United States, and the European Union consider the PKK a terrorist group.

Despite the PKK’s close affiliation with the YPG, the latter enjoys the support of the United States, which uses it as an ostensible bulwark against the ISIS terrorist group in Syria.

The strikes came in response to a Nov. 13 bombing in Istanbul that left six people dead and scores injured. The attack occurred on Istanbul’s popular Istiklal Avenue, which is typically packed with foreign tourists and shoppers.

Turkish authorities quickly arrested dozens of suspects, including the alleged bomber. Within hours of the arrests, the Interior Ministry accused the YPG/PKK of having planned and carried out the attack.

According to Interior Minister Suleyman Soylu, the attack was directed from the majority-Kurdish city of Kobani (also known as Ain al-Arab), located in northern Syria to the immediate south of the Turkish border.

In a message posted the following day on the PKK’s website, the group denied involvement in the deadly bombing.

Despite the denial, Turkey responded by striking a total of 81 YPG/PKK positions in northern Syria and northern Iraq over the course of the past week, according to the Turkish Defense Ministry.

On Nov. 21, Turkish President Recep Tayyip Erdogan said the strikes had “eliminated 12 terrorist hideouts” in and around the city of Kobani.

Speaking to reporters on his way back to Turkey from Qatar, he added: “This counterterrorism operation will continue, both from the air and from land.”

Since 2016, the Turkish military has carried out three major offensives into northern Syria with the stated aim of protecting Turkey’s 565-mile-long border from attacks by the PKK and its Syrian offshoot.

In recent months, Erdogan has repeatedly hinted at plans for a fourth offensive, citing what he describes as stepped-up attacks on Turkish targets from YPG-controlled areas of northern Syria.

Erdogan has also castigated Russia for its “failure” to deliver on earlier promises to ensure the withdrawal of YPG units from areas near Turkey’s southern border.

“Despite our repeated warnings to Russia, which has a responsibility to clear terrorists from northern Iraq and Syria as per our 2019 deal … Moscow has failed to perform its duty,” Erdogan was quoted as saying by Russia’s TASS news agency on Nov. 21.

Vowing that his country would not “remain silent in the face of terrorism,” he added that Turkey would act unilaterally against the YPG if Russia “failed to do so.”

Turkey launched its third offensive into northern Syria, dubbed “Operation Peace Spring,” in October 2019. That offensive sought to establish a 20-mile-wide “buffer zone” inside Syrian territory along the Turkish border.

Days after the operation was launched, Erdogan met Russian President Vladimir Putin in the Russian city of Sochi. At the meeting, Putin promised his Turkish counterpart that Russian troops deployed in Syria would help clear the border area of YPG units.

Shortly afterward, Russian Defense Minister Sergey Shoigu declared that the YPG had withdrawn all its forces from the area. At the same time, Russia and Turkey began conducting joint patrols in the fraught border region east of the Euphrates River.

Russian troops have been deployed in Syria since 2015, when Damascus formally requested Moscow’s help in combating foreign-backed rebels and Jihadist groups.

As of the time of writing, Moscow had not responded to the Turkish president’s criticisms.

The Afghan Minister Who Became a Bicycle Courier in Germany