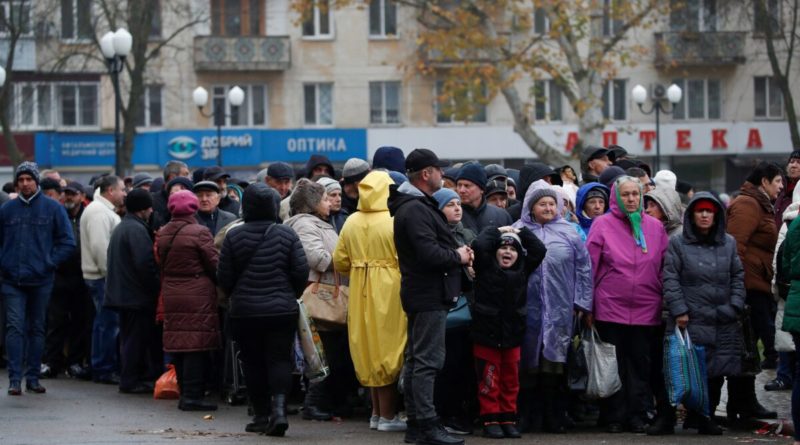 
KYIV—Ukrainians braced for a winter with little or no power in several areas including the capital where temperatures have already dropped below freezing as Russian strikes crippled the country’s energy capacity.

President Volodymyr Zelenskyy urged people to conserve power, particularly in hard-hit areas such as Kyiv, Vinnytsia in the southwest, Sumy in the north, and Odesa on the Black Sea.

Moscow’s response to military setbacks in recent weeks has included a barrage of missile strikes against power facilities, and Zelenskiy said half of the country’s power capacity had been knocked out by Russian rockets.

“The systematic damage to our energy system from strikes by the Russian terrorists is so considerable that all our people and businesses should be mindful and redistribute their consumption throughout the day,” Zelenskiy said in his nightly video address. “Try to limit your personal consumption of electricity.”

Millions of Ukrainians are most likely to live with blackouts—a daily occurrence across the country—at least until the end of March, Sergey Kovalenko, the head of YASNO, which provides energy for Kyiv, said on Monday.

He said workers are rushing to complete repairs before the winter cold arrives.

“Stock up on warm clothes, blankets, think about options that will help you wait a long outage,” Kovalenko said. “It’s better to do it now than to be miserable.”

Citizens in the recently liberated southern city of Kherson, where Kyiv says Russian troops destroyed critical infrastructure before leaving earlier this month, can apply to be relocated to areas where security and heating issues are less acute.

In a Telegram message for Kherson residents—especially the elderly, women with children and those who are ill or disabled—Deputy Prime Minister Iryna Vereshchuk posted a number of ways residents can express interest in leaving.

“You can be evacuated for the winter period to safer regions of the country,” she wrote, citing both security and infrastructure problems.

On Monday evening, Ukrainian presidential adviser Mykhailo Podolyak said Russia was bombarding Kherson from across the Dnipro River, now that its troops had fled.

“There is no military logic: they just want to take revenge on the locals,” he wrote on Twitter.

Moscow denies intentionally targeting civilians in what it calls a “special military operation” to rid Ukraine of nationalists and protect Russian-speaking communities.

Kyiv and the West describe Russia’s actions as an unprovoked war of aggression.

Battles continued to rage in the east following Russian troop movements into the industrial Donbas region from around Kherson in the south.

Moscow has been reinforcing the areas it still holds and pressing an offensive of its own along a stretch of front line west of the city of Donetsk held by its proxies since 2014.

The General Staff of the Ukrainian Armed Forces said on Tuesday its forces repelled numerous Russian attacks in several areas in the Donetsk region.

“The enemy does not stop shelling the positions of our troops and settlements near the contact line,” it said.

Russia and Ukraine on Monday traded blame for at least a dozen explosions at Ukraine’s Zaporizhzhia nuclear power station, which has been under Russian control since soon after it invaded the country on Feb. 24 but is across the Dnipro River from areas controlled by Kyiv.

Ukraine narrowly escaped disaster during fighting at the weekend that rocked the plant, Europe’s largest, with a barrage of shells.

IAEA experts toured the site on Monday, and the agency said they found widespread damage but nothing that compromised the plant’s essential systems.

The reactors are shut down but there is a risk that nuclear fuel could overheat if the power driving the cooling systems is cut. Shelling has repeatedly cut power lines.

Reuters could not immediately verify which side was responsible.

Repeated shelling of the plant during the war has raised concern about a grave disaster in the country that suffered the world’s worst nuclear accident, the 1986 Chornobyl meltdown.

Increased Drinking During Lockdown Could Potentially Cause 25,000 Excess Deaths in the UK: Study