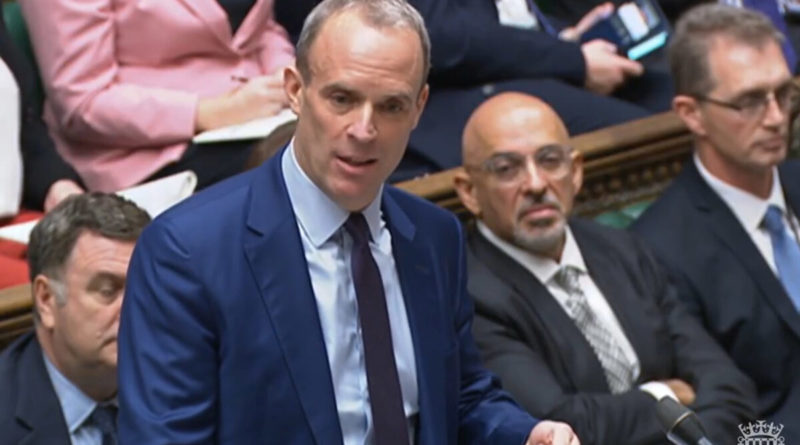 
The UK’s Prime Minister Rishi Sunak on Nov. 16 agreed to his deputy Dominic Raab’s request for an independent investigation into his conduct after two formal complaints were made against Raab.

It comes after British media reported bullying allegations from unnamed sources over the weekend.

Raab requested an investigation on Nov. 16, saying he had “just been notified” of two formal complaints.

In Raab’s letter to Sunak, which Raab posted on Twitter, the deputy prime minister and justice secretary said two separate complaints were made from his time as the foreign secretary and his first tenure as the justice secretary that ended in September.

Raab said he would “cooperate fully” with the investigation and respect “whatever outcome” Sunak decides.

He also said he had “never tolerated bullying” during his tenures in eight ministerial jobs in four government departments.

In response, Sunak thanked Raab for his letter, saying “I know that you will be keen to address the complaints made against you and agree that proceeding in this way is the right course of action.”

“Integrity, professionalism, and accountability are core values of this government. It is right that these matters are investigated fully,” Sunak said.

With Sunak away in Bali meeting leaders from the Group of Twenty nations, Raab stood in for Sunak on Nov. 16 at the Prime Minister’s Questions in Parliament.

Raab told MPs that he believes the complaints were made on Nov. 15 and he is “confident” that he has “behaved professionally throughout.”

The deputy prime minister rejected Labour deputy leader Angela Rayner’s accusation that he “finally acknowledged formal complaints about his misconduct” after “days of dodging and denial,” saying he was notified on the morning of Nov. 16 of the complaints.

He also brushed off Rayner’s demand for him to apologise for bullying, saying, “I’m confident I behaved professionally throughout but of course I will engage thoroughly and look forward to transparently addressing any claims that have been made.”

It’s unclear who will conduct the investigation as the job of the prime minister’s independent adviser on ministers’ interests remains vacant after Lord Christopher Geidt resigned in June.

The Guardian on Nov. 11 cited a number of unnamed sources saying Raab has been “very rude and aggressive” towards civil servants and that he had created a “culture of fear” in the Minister of Justice.

Lord Simon McDonald, who served as a permanent secretary at the Foreign Office during Raab’s time, told LBC that Raab, “one of the most driven people” he had ever worked for, was a “tough boss” and that the allegations are plausible.

Sunak on Nov. 15 defended Raab, saying he did not “recognise the characterization of Dominic’s behaviour.”

Qatar to Require Fans at 2022 World Cup to Be Vaccinated