The United States on Friday imposed fresh sanctions on a network of Russian-based individuals and companies accused of assisting North Korea in procuring components for its nuclear weapons programs.

The announcement came after Washington asserted that Pyongyang had used an intercontinental ballistic missile (ICBM) system in its two recent launches on Feb. 26 and March 4.

“The [Democratic People’s Republic of Korea] continues to launch ballistic missiles in blatant violation of international law, posing a grave threat to global security,” under secretary of the Treasury for Terrorism and Financial Intelligence Brian Nelson said, referring to North Korea’s official name.

All of their property and assets in the United States will be blocked as a result of the sanctions.

The U.S. Treasury Department said in a statement that North Korea has conducted 11 ballistic missile launches since the start of 2022, the most recent being on March 4, which Pyongyang’s state-run media said was an attempt to test cameras installed on a spy satellite.

After analyzing the new missile tests, the U.S. government concluded Thursday that the tests involved a “new intercontinental ballistic missile system” that North Korea first unveiled during a military parade on Oct. 10, 2020.

“The purpose of these tests, which did not demonstrate ICBM range, was likely to evaluate this new system before conducting a test at full range in the future, potentially disguised as a space launch,” Pentagon press secretary John Kirby said.

The ICBM in focus is the Hwasong-17, North Korea’s biggest missile, which could potentially fly up to 15,000 kilometers (9,320 miles), far enough to strike anywhere in the United States and beyond.

North Korea’s state-run media said Friday that the regime’s leader Kim Jong Un inspected the country’s satellite test site and called for its modernization on an “expansion basis” to enable “various rockets to be launched.”

The report noted that Kim also “set forth the task for building some facilities in the launching ground” and gave detailed instructions about the “matters of expanding the capacity of the engine ground jet test site.”

South Korea on Friday urged North Korea to immediately stop any act that raises tensions and regional security tensions. It also warned that Pyongyang appears to be restoring parts of the Punggye-ri nuclear testing site, which the Kim regime razed in May 2018 as a sign of its commitment to end nuclear testing, Yonhap News Agency reported.

The United States has been urging for a return for a dialogue, a call Pyongyang has ignored due to what it says are the U.S. and its allies’ hostile policies. 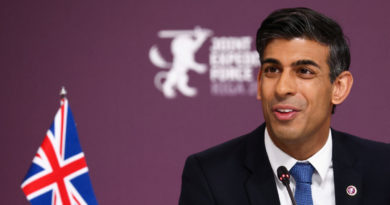