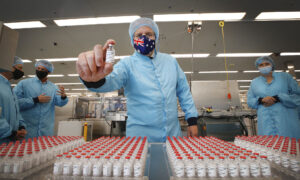 More than half a million Australians have now been vaccinated against COVID-19, with the rollout boosted by the AstraZeneca vaccine manufactured in Melbourne.

The first of 50 million Australian-made AstraZeneca doses have been distributed and more will be on an ongoing basis, Health Minister Greg Hunt said.

He said the decision to produce the vaccine at CSL has ensured Australia is one of the few countries with “strong, clear” domestic supplies going forward.

More than 507,000 Australians had now been vaccinated as of Friday—329,000 vaccines administered in state and territory vaccination clinics, 97,000 in general practices and more than 80,000 in aged care homes, Hunt said.

“Our GP’s have played a vital role in this expansion and have not only been vaccinating over the week, but many practices are continuing to vaccinate on Saturday and Sunday this weekend,” he said in a statement on Sunday.

Meanwhile, health authorities in Queensland are scrambling to track down all contacts of two Brisbane friends who tested positive for coronavirus.

A week out from Easter, Queensland Health revealed on Saturday night one of the men, aged 26, held a house party while he was waiting on his test result, despite instructions to self-isolate.

Health Minister Yvette D’Ath said reports one of the cases had thrown a party for up to 25 guests were incorrect. Further investigations by police and health authorities suggest the people who attended were limited to the man’s housemates and one other person.

Ms D’Ath said officials acted on what they understood to be true at the time and told reporters she became aware of the new information on Sunday morning.

“It is extremely unfortunate that what has been discovered over the last 24 hours, that it wasn’t 25 people, but as I understand it this is the information that was received from this gentleman himself,” she said.

Chief Health Officer Jeannette Young said the state’s two active cases were both in hospital and while it was too early to relax, she was pleased testing efforts had not uncovered further examples of community transmission.

She said it was “most likely” the historical case was one of the missing links between a doctor infected with COVID-19 and the most recent cluster.

“We won’t be able to do genome sequencing on him because he dosn’t have any active virus at the moment but we will continue to test him to see if we can work out what has happened.”