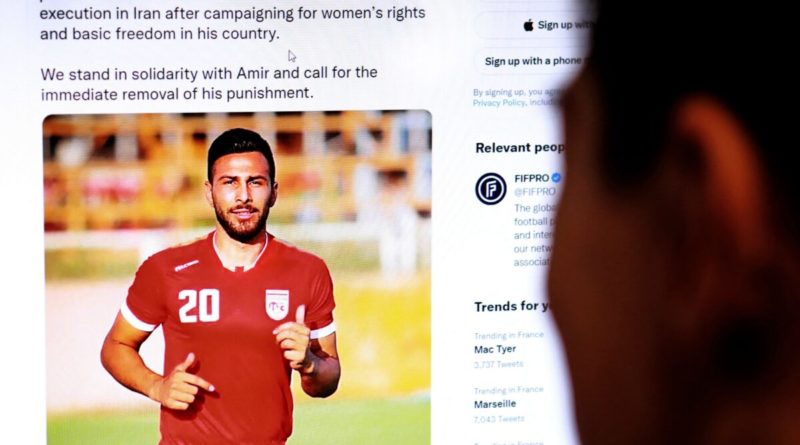 
An Iranian professional soccer player is at risk of being sentenced to death for his involvement in a protest that erupted in the country about three months ago after a 22-year-old Kurdish-Iranian woman died while in custody, according to multiple reports.

The International Federation of Professional Footballers (FIFPRO), which is the global union for soccer players, said on Twitter that the organization is “shocked and sickened” after reports emerged that Amir Nasr-Azadani may be executed.

“FIFPRO is shocked and sickened by reports that professional footballer Amir Nasr-Azadani faces execution in Iran after campaigning for women’s rights and basic freedom in his country,” it said.

“We stand in solidarity with Amir and call for the immediate removal of his punishment,” it added.

FIFPRO is shocked and sickened by reports that professional footballer Amir Nasr-Azadani faces execution in Iran after campaigning for women’s rights and basic freedom in his country.

We stand in solidarity with Amir and call for the immediate removal of his punishment. pic.twitter.com/vPuylCS2ph

Nasr-Azadani, a 26-year-old former soccer player of Rah-Ahan and Tractor who competed in Iran’s Premier League until 2019, was arrested in late November after taking part in a protest in which three security officials died, Iranwire reported, citing Saeed Azari, a former director of a soccer club who confirmed Nasr-Azadani’s arrest on Instagram.

Azari shared pictures of two Iranian soccer players, Nasr-Azadani and Voria Ghafouri, who were both arrested by security forces.

The Iranian network contacted a relative of Nasr-Azadani, who told the publication that his family was threatened by authorities in the days after his arrest. The unidentified relative said that police threatened them that Nasr-Azadani would face a more severe punishment if they disclosed news of his arrest.

According to the Detainee Follow-up Committee’s list that shows Iranian citizens who have been sentenced to death, Nasr-Azadani has been accused of “waging war against God” after attending protests in the central Iranian city of Isfahan.

The main protests in 2022 have been conducted by civilians rather than militant groups. The demonstrations have turned into a popular revolt by furious Iranians from all layers of society, posing one of the most significant legitimacy challenges to the Shi’ite clerical elite since the 1979 Islamic Revolution.

The protests erupted after 22-year-old Kurdish-Iranian woman Mahsa Amini, who was arrested in mid-September by morality police enforcing the Islamic Republic’s mandatory dress code laws, suddenly died while in custody.

Witnesses have claimed that Amini was beaten in detention for allegedly improperly wearing a hijab, but the Iranian government has said she suffered a heart attack.

The United Nations (U.N.) Economic and Social Council, meanwhile, voted on Wednesday to immediately oust Iran from the U.N.’s premiere global due to the regime systematically violating the rights of women and girls.

The U.S.-sponsored resolution was sparked by Iran’s ongoing brutal crackdown on protesters who took to the streets in September after the death of Amini.

The vote to remove Iran from the Commission on the Status of Women for the remainder of its 2022–2026 term was 29–8 with 16 abstentions in the 54-member council.

Russia opposed the resolution and said before the vote that it wants an opinion from U.N. legal experts on whether the Economic and Social Council was legally able to oust Iran.

The resolution expresses “serious concern” over Iran’s actions since September “to continuously undermine and increasingly suppress the human rights of women and girls, including the right to freedom of expression and opinion, often with the use of excessive force, by administering policies flagrantly contrary to the human rights of women and girls and to the mandate of the Commission on the Status of Women, as well as through the use of lethal force resulting in the deaths of peaceful protesters, including women and girls.”

Established in 1946, the Commission on the Status of Women plays a leading role in promoting women’s rights, documenting the reality of women’s lives around the world.

Its 45 members, from all regions of the world, are elected for four-year terms by the U.N. Economic and Social Council. Iran was elected from the Asian region. 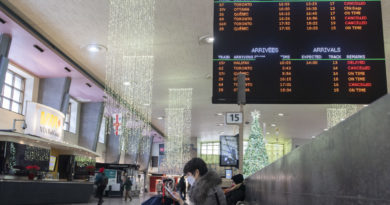 VIA Rail Apologizes for Train Delays and Cancellations Over Christmas Holidays