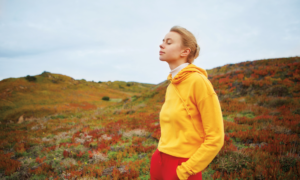 According to a study in the British Medical Journal, dementia, memory loss, headaches, and fatigue may be symptoms caused by infection of the SARS-CoV-2 virus. The pandemic has been going on for two years, and the medical community has now gained a better understanding of the sequelae of the COVID-19 disease. We spoke with Dr. Yuhong Dong, Chief Scientific Officer of a Swiss biotech company and expert in antiviral drug development and infectious diseases, about why this happens.

Some who contract the disease suffer from what is often called “long Covid,” where various symptoms persist long term.

“Long-term COVID symptoms have created a considerable social burden on society as a whole. A survey of more than 4.3 million comployees, published on February 8 by the Chartered Institute of Personnel and Development (CIPD), a human resources group, found that a quarter of British employees cited chronic COVID symptoms as the main reason for their prolonged sick leave,” Dr. Dong said.

Unlike the acute symptoms that occur within three weeks of infections, these can be additional health issues that arise later, and could persist for six months or even longer after the initial infection, Dr. Dong explained. Common symptoms include fatigue, dyspnea (chronic heart and lung dysfunction, impaired muscle function), and cognitive dysfunction (attack on nerves).

“The virus may have been cleared from most organs of the patient’s body, but it is still lurking in some corners of the body, such as the digestive system or nervous system,” Dr. Dong said.

She referred to a large UK cohort study published in the Lancet Respiratory Journal in October 2021 found that people with long Covid symptoms with more severe mental and physical impairment may have elevated levels of persistent C-reactive protein (CRP), suggesting an association with the presence of a persistent inflammatory state in the body. The widespread inflammatory state may lead to fibrosis of the lung tissue, heart problems, renal pathology, etc., causing the corresponding symptoms.

“Research has found that SARS-CoV-2 invades nerve cells and causes structural damage to the brain. The virus may also alter the metabolic state of cells,” Dr. Dong said.

The article published in the British Medical Journal was part of a large study conducted jointly by Optum Health Management Industries, a division of UnitedHealth Group, the largest health insurance company in the United States, and Harvard University. In the study, 87,337 eligible, insured individuals aged ≥65 years who were infected with COVID-19 were matched to three comparison groups who were not infected: the 2020 comparison group (n=87k), the 2019 comparison group (n=88k), and the historical lower respiratory tract illness comparison group (n=73k). The study analyzed the presence of persistence and changes in the odds of new long-term symptoms 21-120 days after acute infection.

That study found that about a third of patients with one or more persistent or new clinical sequelae that required medical attention during the post-acute phase of the illness, 11 percentage points higher than a comparator cohort, Dr. Dong said.

There was a higher rate of respiratory failure, hypertension, memory difficulties, kidney injuries, mental health diagnoses, hypercoagulability, and cardiac rhythm disorders. Patients who were admitted to the hospital for COVID-19 and significantly higher risks for sequelae than patients who did not require hospital admission.

Given that the age 65 and older demographic had the highest showing of long term symptoms, compared to the general public, it also raised the question of whether those in this demographic who begin to feel symptoms such as memory or respiratory difficulties could have contracted COVID-19 without acute symptoms. Dr. Dong said this was a possibility that should not be ruled out, but could also be due to a host of other reasons.

“If the virus enters the body, there are two outcomes: either the body completely clears the virus (acute infection) or the disease persists, causing chronic inflammation and long-term sequelae in the body. The virus is no longer detectable in the body and there is no indication for antiviral therapy. In the treatment of long Covid, people have realized that one treatment alone cannot solve all problems. ” Dr. Dong said.

She further explained the vexing nature of sequelae. With surgery, a doctor can set a broken bone, cut out a tumor, or open a blocked vessel. With medicine, a doctor can prescribe antibiotics to suppress bacteria causing an infection, or antipyretic drugs to stop a fever.

“For those with ‘long Covid,’ there is no tumor nor detectable virus in their bodies. No antiviral or surgical techniques can be used, and the virus is latent in the deeper layers of the body. The human body has not only the physical part, but also the deeper energy and spiritual layers. Long COVID syndrome indicates something occurs at a more subtle and deeper than the cell level. Therefore, we need something that works on the deeper layers of the cell in order to have a therapeutic effect for long COVID,” she said.

And what exactly works on that deeper layer?

“A February article published by The British Medical Journal mentions that there are currently about 80 long Covid clinics in England that treat long Covid with a ‘holistic approach,’” Dr. Dong said.

“The holistic approach is a therapy for the body, mind and spirit. It usually involves changing the overall lifestyle, mental, and behavioral habits that are causing the person to become ill. It is not only about addressing a single organ or a single problem; it is also multidisciplinary and has general physicians.”

The therapies include physical ones, such as infrared, ultrasound, heat therapy, and electrotherapy, where energy and frequencies resonate with the body to heal. Dr. Dong gave an example:

“Energy and frequency are factors that can penetrate the molecular structure of human cells and reach deeper into the body. For example, modern scientific research on moxibustion has also found that the peak of the radiation spectrum when mugwort is burned overlaps with the infrared frequency of the human body, which can activate the cellular molecules in the human body and cause the same frequency resonance between the deeper layers of human body and moxibustion, which can activate cells, promote blood circulation, accelerate metabolism, and alleviate the inflammation,” she said. “In turn, it promotes the body’s recovery.”

The therapies also go beyond the physical, such as with psychotherapists, who guide the patients through talking, eliminating bad emotions, releasing stress.

“They turn the patient’s negative emotions, anxiety, depression, and other states into positive emotions. Emotions correspond to energy states, with negative emotions corresponding to negative energy, positive emotions corresponding to positive energy. People who regularly focus on moral cultivation have stronger anti-viral immunity in their immune cells. Spirituality connects with the cells of the human body—people who are altruistic, honest, tolerant, and looking for meaning of life have a more subtle material structure which can penetrate the cellular structure of the molecular layer,” Dr. Dong said, referring to psychoneuroimmunology, an emerging area of study that has shown the link between our spiritual states and immunity.

“Dr. Christian Sandrock, a professor of critical care and infectious disease medicine at the University of California, Davis, has suggested ways to treat long Covid, including adjusting sleep, relieving stress, meditating, slowing down the pace of life, giving oneself a chance to heal, and cultivating the body’s ability to recover itself and heal itself,” she said.

In the course of the pandemic, people have become more and more aware that disease, especially this one, cannot be remedied with a one-size-fits-all solution, and this is perhaps one silver lining.

“When one method does not work, we need to put aside some old concepts and try some new methods with an open mind,” Dr. Dong said.

Why Pigs Don’t Get Sick From the Coronavirus

COVID-19 Cases, Hospitalizations Continue to Drop in US: CDC