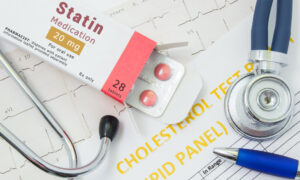 Statins have long been a controversial medication in the health world. While some studies say they’re effective at reducing cholesterol and the risk of cardiovascular disease, others highlight the harms and adverse effects that can come with taking the drugs.

The U.S. Preventive Services Task Force (USPSTF), which delivers recommendations on statin use, recently drafted guidance to update recommendations that were approved in 2016.

Some medical experts say the recommendations aren’t rigorous enough, while others say the drugs benefit fewer people than some may think. All of the back and forth highlights newer treatments and the possible efficacy of lifestyle interventions.

Currently, the USPSTF recommends that people should take a statin if they’re high risk—that’s between the ages of 40 to 75, with at least one cardiovascular disease (CVD) risk factor, and a 10 percent or greater 10-year risk for CVD. CVD risk factors include diabetes, hypertension, smoking, or high cholesterol.

B grade: People between 40 and 75 years of age who are at high risk should take a statin.

C grade: People between 40 and 75 years of age who are at increased risk, but not at high risk, may benefit from statins. They should talk with their clinician and decide together if taking a statin is right for them.

The USPSTF says more research is needed on whether people 76 years of age or older should take a statin to prevent a first heart attack or stroke.

“This new draft recommendation is consistent with the prior recommendation and reinforces that for some people, taking a statin can help prevent a first heart attack or stroke and prolong life,” USPSTF Vice Chair Dr. Carol Mangione told The Epoch Times.

The draft statement is open for comments through March 21. From there, the updated guidelines would have to be approved. The final recommendation statement is then published on the USPSTF website and published in the Journal of the American Medical Association.

Dr. Robert S. Danziger, a cardiologist and professor at the University of Illinois at Chicago, told The Epoch Times that he agrees with the guidelines, as they’re consistent with the American College of Cardiology (ACC) and American Heart Association (AHA) recommendations. However, that guidance is much more detailed on specific patient scenarios and statin recommendations, Danziger said.

“Statins are a cornerstone of lipid management and almost always lowers LDL [low-density lipoproteins],” he said.

Other medications or alcohol use can exacerbate adverse effects, according to Danziger.

“Statins are not for all because some people experience adverse (side) effects,” he said.

There are a variety of forms of lipid disorders (such as hypertriglyceridemia), for which statins aren’t the optimal treatment, according to Danziger. Patients who don’t respond positively to statins do have other options. Those with non-severe adverse effects can discontinue the medication and replace it with a modified dose, a different statin, or a combination of statin and non-statin therapy (known as a “statin re-challenge”).

People at risk for CVD who don’t want to start a statin should give them a try.

“They are the most established treatment for hypercholesterolemia with elevated LDL,” he said.

Some patients undoubtedly benefit from taking statins, according to Danziger. This is true for patients with clinical atherosclerotic cardiovascular disease (ASCVD), those who have had a previous heart attack, those for a very high risk of ASCVD with severely high LDL-C over 190 mg/dL), and people aged 40 to 75 who have diabetes and LDL of greater than 70 mg/dL.

Statins aren’t the only option for lowering cholesterol, some doctors say.

“There are a variety of alternatives to statins and more are coming,” Danziger said.

Other drugs that lower LDL, which is the “bad” cholesterol, include bile acid sequestrants, ezetimibe, and PCSK9 (proprotein convertase subtilisin/kexin type 9) inhibitors.

A new PCSK9 inhibitor on the market is inclisiran (Leqvio), which is an injection taken every six months.

“It has a new mechanism which uses the RNA silencing mechanism (RISC) in liver cells to block the production of PCSK9 enzyme,” Danziger said.

Lifestyle modifications can lower cholesterol, but not often to the level that most patients and doctors want to see.

Kevin C. Maki, an adjunct professor at the Indiana University Public School of Health, said the USPTF guidelines may be too conservative. His interpretation of evidence aligns more closely with the ACC/AHA recommendations.

“Many who don’t tolerate a particular statin or dose can tolerate a lower dose or another agent,” Maki said.

He advised taking other medications (such as ezetimibe, PCSK9 inhibitors, citrate lyase inhibitor, or bile acid sequestrants) in addition to lifestyle modifications.

Other alternatives are alirocumab, evolocumab, and inclisiran, but they’re about $450 per month, so they can be difficult for people to afford, noted Dr. Elizabeth Klodas, a cardiologist from Minnesota.

Klodas pointed out that the USPSTF recommendations are largely in line with the 2018 ACC/AHA cholesterol management guidelines, except that high-intensity statin use isn’t specifically recommended for “high risk” individuals by USPSTF. ACC/AHA guidelines identify high-risk patients as those having a 20 percent or higher risk of a cardiovascular event in the next 10 years. USPSTF identifies “high risk” as anyone with 10 percent or more, she noted.

“One could definitely argue that intensity of statin therapy should go up with increasing risk—and I do think this is a potential problem,” Klodas told The Epoch Times. “In my own practice, I try to get to lower LDL goals with increasing levels of overall CVD risk.”

A Battle for Better Health

Klodas is also the chief medical officer and founder of Step One Foods, a line of foods designed to lower cholesterol.

“In effect, we are using statins to cover up the effects of what we eat, instead of changing the food. It actually makes no sense,” she said, noting that statins can benefit certain groups of people, such as those with a history of known coronary or vascular disease, diabetics, and people with familial hypercholesterolemia.

With many people hesitant to take statins, that means there are many people not doing anything to manage high cholesterol, according to Klodas.

“What we eat has a tremendous impact on cholesterol levels, with even small changes yielding medication-level LDL reductions in some,” she said.

Klodas recommended trying a food-based approach, even to those already on statins.

“Statin side effects are dose-dependent, and this may allow you to use lower medication doses to get to the same cholesterol goal,” she said. “Statins just lower cholesterol.  They don’t help you lose weight, improve your blood pressure readings, improve blood sugar control, or make you feel better.”

‘I Had to Stand up and Try to Do Something:’ Professor of Medicine on Suing School Over Vaccine Mandate