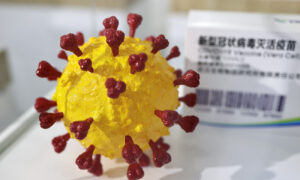 The COVID-19 clinical trial where scientists purposefully infected volunteers showed that the symptoms an infected person experienced did not indicate how likely they were to pass on the virus that causes COVID-19, researchers behind the trial said.

“There was no correlation between the amount of viral shedding by qPCR or FFA and symptom score,” researchers with Imperial College in London said in a paper published by Nature Medicine expanding on the findings.

Some key findings from the trial were announced in February.

FFA stands for focus-forming assay, or a way to quantify viruses like SARS-CoV-2; qPCR refers to quantitative polymerase chain reaction testing. Both were used to test viral load, the amount of virus present in an individual that could lead to transmission.

“Our data clearly show that SARS-CoV-2 viral shedding occurs at high levels irrespective of symptom severity, thus explaining the high transmissibility of this infection and emphasizing that symptom severity cannot be considered a surrogate for transmission risk in this disease,” researchers added.

The trial involved 36 healthy volunteers aged 18 to 29 with no signs of previous infection or COVID-19 vaccination. Eighteen ended up getting infected following exposure. Two were excluded from the analysis because they tested positive for antibodies between screening and inoculation.

Patients spent time, following infection, in negative pressure rooms inside a quarantine unit at the Royal Free London NHS Foundation Trust. They were monitored 24 hours a day while there.

Researchers found that viral shedding seemed to start within two to four days of inoculation and peaked four to five days following infection. The virus was first detected in the throat, then the nose, before peak symptoms in most cases.

Researchers also found no difference between the patients who were given remdesivir, a COVID-19 treatment, and no treatment.

All symptoms, regardless of treatment regimen, were mild to moderate, with symptoms peaking at 112 hours after inoculation. None of the infected volunteers suffered disease in their lungs. Many experienced disturbances to their smell, with nine suffering from complete loss of smell. Partial smell disturbance lingered for some 28 days post-infection.

Limitations of the study include its small sample size.

“I am not sure I understand the approach, given that laboratory infections are typically not felt to be equivalent to community infections and there is currently abundant community spread,” Dr. Clifford Lane, a deputy director at Fauci’s agency, told the pair in an Oct. 20, 2020 email.

Collins and Fauci did not respond to requests for comment.

“Due to the prevalence of SARS-CoV-2, the vast majority of the scientific questions we need answered can be addressed by studying those who were naturally infected with the virus through human contact,” Lane told The Epoch Times in a recent email. “Furthermore, obtaining the proper informed consent of interested volunteers remains challenging because of the significant gaps in knowledge about the long-term sequelae of the virus.”

American Diets Have Gotten a Little Healthier, but Still Fall Short of Guidelines