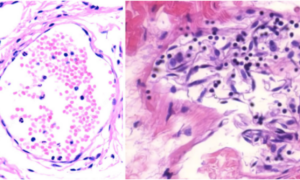 Two microbiologists wrote a counterargument to a piece by “Health Feedback” that challenged their August publication titled ‘Vascular and organ damage induced by mRNA vaccines: irrefutable proof of causality.‘

Dr. Michael Palmer and Dr. Sucharit Bhakdi said in a statement sent to The Epoch Times on Sept. 18 that the Health Feedback article is “quite simply a hit job without any scientific merit.”

“Throughout her entire commentary, [Health Feedback’s] Dr. Carballo-Carbajal has avoided to substantially address the evidence presented by Dr. Burkhardt and his colleagues, as well as our interpretations of it,” Palmer and Bhakdi wrote.

Their study builds upon the findings of German pathologists Dr. Arne Burkhardt and Dr. Walter Lang using histopathology and immunohistochemistry to detect vaccine-induced expression of the spike protein.

“In the foci of inflammation, the vaccine-induced expression of spike protein had also been demonstrated, indicating very strongly a causal chain from vaccination to vascular and organ damage and ultimately death,” they stated in their recent counterargument.

Health Feedback published the rebuttal of the microbiologists’ study on Sept. 3. The author is Dr. Iria Carballo-Carbajal, science editor of the publisher.

Health Feedback said that “the two authors of the article have a history of spreading misinformation about COVID-19 and COVID-19 vaccines,” and cited a series of links that refute some of their claims.

Palmer answered: “In support of this statement, she merely assembles a list of links, but she makes no argument as to the facts whatsoever. Her statement, therefore, amounts to no more than slander.”

Health Feedback, which is a member of the Vaccine Safety Net led by the World Health Organization (WHO), did not respond to a request for comment by The Epoch Times.

Palmer and Bhakdi maintain that Health Feedback’s rebuttal has many issues, but they only addressed the main ones to save time.

One of these is the dispute on lipid nanoparticle distribution.

“Palmer and Bhakdi cited biodistribution data submitted by Pfizer to Japan’s regulatory body Pharmaceuticals and Medical Devices Agency (PMDA) to support the claim that ‘the vaccine quickly distributes through the body.’ However, this is misleading because Pfizer’s data actually showed that the majority of the lipid nanoparticles remained on the injection site, and only a tiny fraction traveled to other tissues,” Health Feedback wrote.

“As Health Feedback explained in an earlier review, pages 5 and 6 of the technical document submitted by Pfizer show that most of the lipid nanoparticles administered (52.6 percent) remained at the injection site at one hour post-injection, and 18.1 percent went to the liver at eight hours post-injection,” the WHO group stated.

Bhakdi and Palmer responded to this issue: “What [the author] does not mention is that already after two hours that value has dropped to below one third of the total. A problem with this entire data set, however, is that the total of all of the organs combined never adds up to 100 percent. Without going into too much detail, this is to be expected, given the technical difficulties of such measurements.”

They further argue that the results would be much more variable in humans than in rats, and note that “injection into the highly vascularized deltoid muscle of a young athlete should result in substantially higher systemic distribution than that into the typically much less used and less perfused muscle of an elderly person.”

There have been recent reports of healthy athletes suddenly dying in larger numbers than usual.

“A substantial fraction of the vaccine must be assumed to be taken up into the system, where it may give rise to spike protein expression and subsequent organ damage—and no more than this was expressed in our article,” the doctors’ joint statement read, adding that this is the crux of the matter.

Another focus for debate is the period of time that the spike protein is expressed in the human body after vaccination.

Health Feedback states that there is no evidence indicating that mRNA COVID-19 vaccines cause “long-lasting expression” of the virus’s spike protein.

“The idea that mRNA from COVID-19 vaccines can remain in our bodies in the long term is a common myth with no scientific basis. mRNA COVID-19 vaccines deliver the genetic instructions to the muscle cells to produce the spike protein of SARS-CoV-2. Thus, they train our immune system to recognize and respond more rapidly to the virus if it encounters the virus in the future,” Health Feedback said.

The microbiologists disagree: “The ‘common myth’ is in fact supported by solid evidence. The mRNA, and the spike protein expressed from it, were demonstrated in lymph nodes near the injection site for up to 60 days after injection by Röltgen et al.”

“Long-lasting persistence of the vaccine mRNA in skeletal muscle tissue distant from the injection site was recently reported by Magen et al,” they said. “Finally, long-lasting persistence of the spike protein in the bloodstream, and therefore again longlasting expression, was also confirmed by Bansal et al. Burkhardt’s detection of long lasting spike protein expression by immunohistochemistry thus fits the overall picture of the available evidence, but it does extend the time horizon of persistence to up to nine months after injection.”

The final big point that was debated was Dr. Burkhardt and Dr. Lang’s pathological research of patients whose families requested a second verdict on their loved one’s death.

“The autopsy findings discussed in our article were provided to us by Dr. Arne Burkhardt, an emeritus professor of pathology with extensive diagnostic experience—he has evaluated approximately 40,000 autopsies over the course of his career. He reviewed and approved the text of our article before its publication.”

A detailed discussion on lymphocyte accumulation can be read here (pdf).

5-Minute Instant Trick to Get Rid of That Stubborn Headache: No Painkillers Used